“I overhead two other people across the table excitedly talking about how they were making their bracelets for their kids,” Smith wrote in an email. “The genuine smiles on both of their faces were really amazing to see.” A service member crafts a bracelet.

That was the point Smith, who also volunteers at USO Camp Buehring, realized why the activity was so special.

“We take on the burden of understanding we will not be home for significant events,” Smith wrote. “But when we have the ability to influence our family’s day to day with a simple gift [like a handmade 550 cord bracelet sent from overseas], that leaves a lasting impression on our hearts.”

In the past few years, 550 cord bracelets – which are crafted from parachute cord – have gained popularity, creating a demand for bracelet-making classes at USO centers around the world.

In Southwest Asia, where troops deploy without their families, 550 cord workshops have become a popular way for service members to relax, be creative and make gifts for loved ones. Service members show off their 550 cord bracelets at USO Bagram. Sarah Kemp shows off one of her treasured 550 cord bracelets.

The classes have also become a way for service members to stay busy and bond with comrades during long days away from home.

“It helps them to be creative and passes the time away,“ Army Spc. Barbara Evans, who is also a USO volunteer, wrote in an email. "They get excited to meet other people who like doing the same thing as them.”

USO centers offer a variety of different cord colors, buttons and clasps for troops to choose from. Service members can even create new ways to braid the cord to make their bracelets unique.

Your donations help us provide programs like this for service members around the world.

Origins of the Cord Bracelet

Before it was braided into bracelets, 550 cord – also known as survival cord, paracord or parachute cord – was used to craft parachute suspension lines during World War II.

Back then, paratroopers would cut the cord off their used parachutes and take it with them into the field to use for anything from securing equipment to vehicles to fashioning make-shift shoelaces. Many troops came to rely on the cord to craft tourniquets, make temporary shelters, hang clothes or catch fish in a survival situation.

Today’s service members still use the same strong, semi-elastic nylon cord to perform a slew of field and survival tasks, perhaps explaining why so many choose to wear a 550 cord bracelet – which is made from about 10 feet of paracord – around their wrists.

VIDEO: HOW TO MAKE A 550 CORD BRACELET 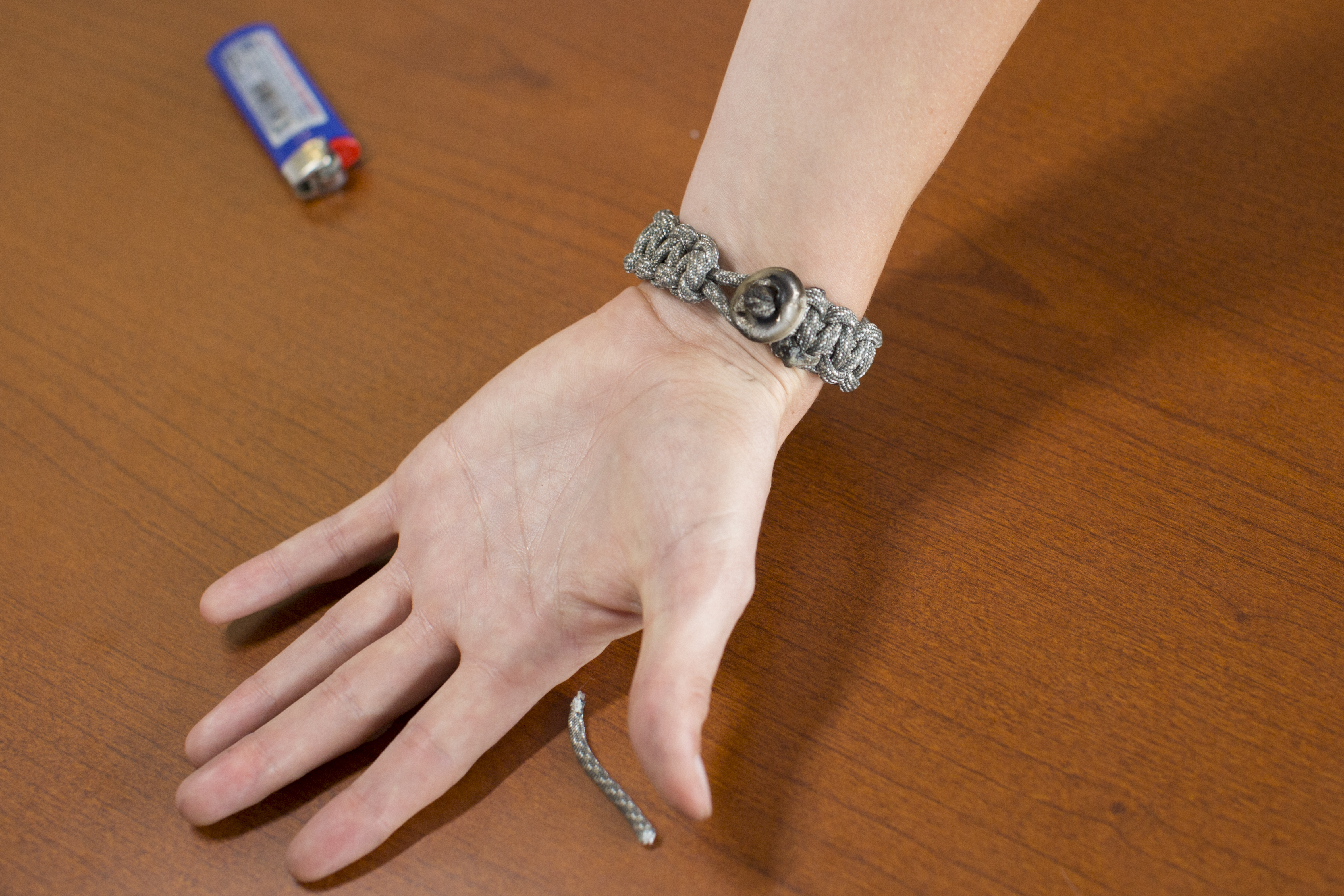 Part of the reason troops, and now civilians, find 550 cord so useful lies in the cord’s layered, woven design.

"Each soldier has their own story about how 550 cord saved their backside once, I can guarantee it,” Smith wrote.

The 550 cord has proven to be such a useful tool that NASA has included it as a necessary item on a number of missions and even used it to repair the Hubble Space Telescope in 1997.

‘It Meant So Much’

Although 550 cord bracelets can come in handy in a sticky situation, for many troops, wearing the bracelets is more about camaraderie and connection than preparedness. That’s why so many troops prefer handmade bracelets over buying them from retailers.

“Now I see the bracelets [for sale] everywhere,” Kemp wrote. “It honestly annoys me. Because for me, it’s a tradition so steeped in the military.” According to Kemp, who has also worked as a volunteer coordinator at USO Kandahar in Afghanistan, many of the 550 cord bracelets symbolize deep emotional connections, important relationships or even fallen service members.

“There are usually stories behind them,” Kemp said.

One of Kemp’s most treasured bracelets, which she still has, was a gift from a soldier who made it at a USO class. The soldier wore the bracelet out on patrols while he was at a forward operating base. When he returned, he gave the bracelet to Kemp and told her it was his lucky charm.

“The original colors were unrecognizable under the dust and dirt, but it meant so much,” Kemp said.

Want to learn how to make your own 550 cord bracelet? Check out our how-to tutorial here.