The Tragic Story Behind the Latest Cover of On Patrol

Air Force Technical Sergeant Nathan Schmidt was a pararescue jumper with the 131st Rescue Squadron in Moffett Field, California, and he was my good friend. On October 11, he died during an off-duty skydiving accident near Hollister, California.

I met him while stationed on the same base as an HH-60 Pave Hawk helicopter aerial gunner. Helicopter crews like the one I was a member of work closely with pararescue jumpers (PJs) during deployments because we are their main mode of transportation to and from the trauma victims they work to save. To put it in simple terms, he was the paramedic and I provided security for an airborne ambulance.

While deployed to Helmand province, Afghanistan, in the spring of 2013, Nathan was one of two PJs hard crewed to my helicopter. We spent the whole deployment together and that’s how we got to know each other. We were brothers bonded by war. Nathan was fun—just a happy-go-lucky kind of guy—and extremely proficient at his job. I was impressed by his abilities and we made each other laugh all the time with our similar senses of humor.

When I deployed to Afghanistan, I brought some materials to create tintype photos using the same antiquated photographic process used during the American Civil War. He commissioned me to make a portrait similar to his ancestor, the great William “Buffalo Bill” Cody. The portrait I took—the same image used for the cover of On Patrol—captured Nathan so deeply, he stared intently at it with his solemn eyes deep in thought. 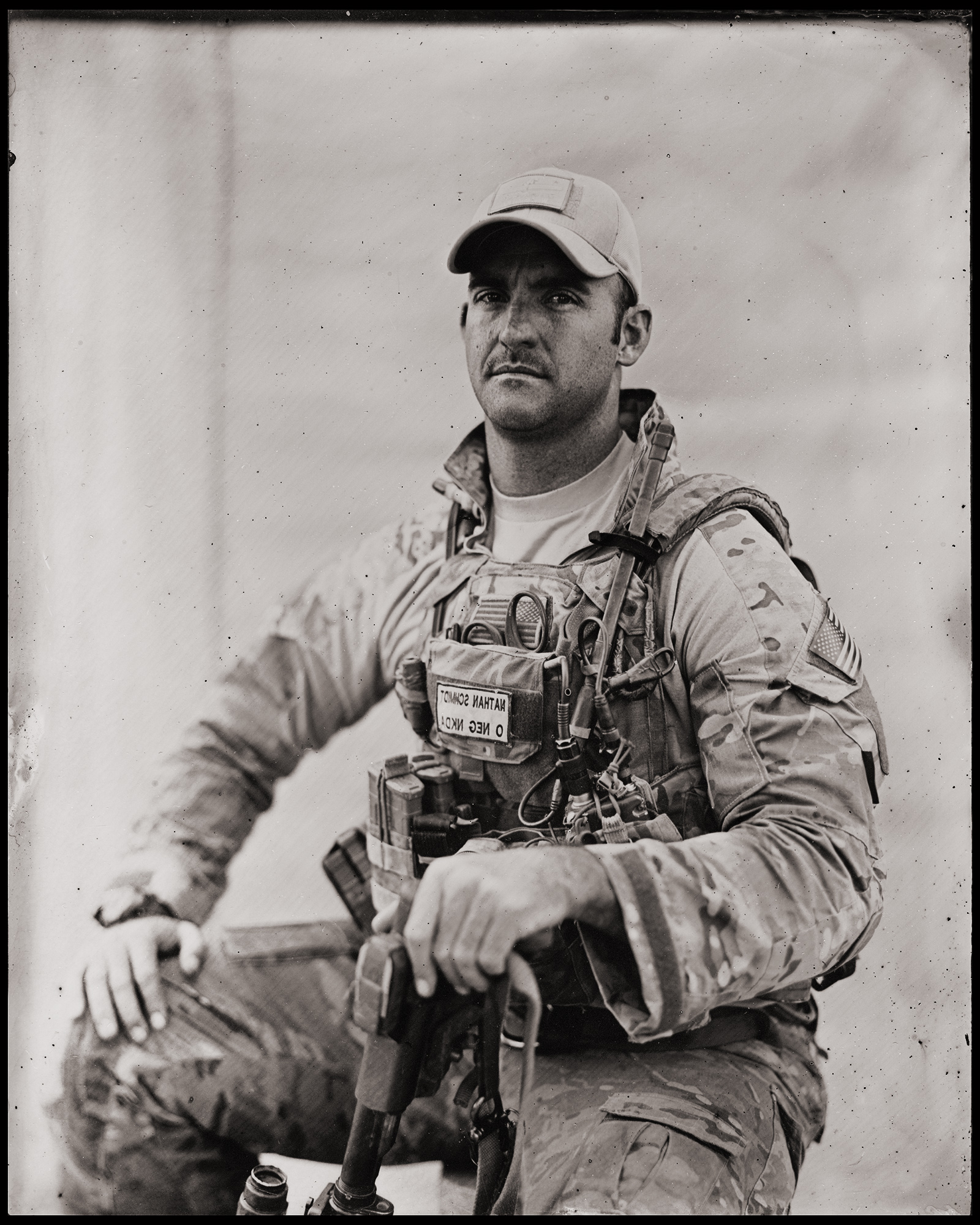 This tintype image of Air Force Technical Sergeant Nathan Schmidt is reversed, but it’s not a mistake. That’s what happens when you scan a tintype photo. The 150-year-old photographic process produces a tintype—or collodion positive—on a thin sheet of metal. Photo by Ed Drew

I had never seen my friend get that serious, and although we didn’t know each other long, I imagined it wasn’t a mood that struck him very often.

After Afghanistan, we remained connected and we confided in each other. We weren’t best friends, but I knew I’d know him for the rest of my life. There was a comfort in knowing he was a reliable person I could trust. Whenever we met, we happily exchanged stories about our lives and he wanted to help me start a new career. He said he would do anything to help and he meant it—his compassion is what defined him with so many people. For me, his positivity and his genuine belief in me are things I’ll always remember about Nathan.

It’s hard to think he is no longer with us. Nathan seemed larger than life, and in my deepest feelings I never thought he would pass so soon. Instead, I imagined us as old men sharing war stories and accumulated tales from our life journeys while laughing at the longevity of our friendship. It saddens me that I will never have the opportunity to share a good story with him again.

For now, I am comforted by the notion that Nathan inspired me to reach my potential and our last moments together were spent going over this. We laughed, joked, drank and bonded and I couldn’t have asked for a better time. I believe we are defined by the people that affect our lives greatly, and I am proud to say that Nathan is one of those people for me.

As a pararescueman, he saved many lives, and as my friend, he inspired mine. Rest easy Nathan, fair skies always for you, my friend.

—Ed Drew is an artist and former staff sergeant who served as an HH-60 aerial gunner with the California Air National Guard. To see more of Drew’s work, go to eddrew.com or follow him on Instagram (@ed.drew).