USO Tour Veterans, In Their Own Words

Established in 1941, the USO has answered the call to keep our service men and women connected to the people and places they love. In 1941, that meant providing entertainment. Wherever there were GIs, the USO would make them laugh and feel at home.

While times have changed and the USO’s programs and services have evolved, the organization still entertains the military members stationed all over the world. From concerts to meet-and-greets, entertainers touring on behalf of the USO have made some very special stops along the way. For an injured service member, just having a celebrity stop by for a chat can do wonders for a flagging spirit.

One of the most popular tours doesn’t even have a human in the cast. Launched in 2008, the Sesame Street/USO Experience for Military Families has reached more than 540,000 service members and their families. For years, Bob Hope was synonymous with USO. From his first USO show on March Field, California, on May 6, 1941, to his last shows in Saudi Arabia and Bahrain in December 1990, he made it his mission to make service members laugh and to keep their minds off their troubles, even if just for a little while.

As the USO celebrates its 75th anniversary, and looks forward to another 75, On Patrol asked USO tour veterans—actors, musicians, athletes, authors, cartoonists and even a Muppet or two—why they hit the pause button on their lives to support our military and their families. Rob Riggle, actor, comedian and retired Marine Corps lieutenant colonel: “I made a promise to myself when I was in uniform and serving overseas that if I was ever in a position to come back and entertain the troops, I would. I’ve been blessed enough in my career as an actor and comedian, that the USO thought enough of me to let me be part of their shows and tours. I love our troops and I know what it’s like to be deployed far from home and loved ones, so I just want to let them know that we’re thinking of them back home. … always.”

Steve Byrne, actor and comedian: "I feel it’s extremely important to acknowledge our men and women who serve our country because, if not for them, I don’t get to do what I do. I honestly feel that way, but now that I am a father of two, I have a deeper appreciation of time. These brave men and women who are serving overseas are away from families. These are fathers, mothers, brothers and sisters, sons and daughters that are missing first steps or first words from a baby, a first recital, birthdays or holidays away from loved ones and families and to me that means more than anything. They are willing to sacrifice these great memories to defend and protect our country. That to me is paramount and I’ll do my best to always acknowledge not only their service but the personal sacrifices.” Kate Walsh, actress: “It’s pretty simple. I wouldn’t be able to do what I do if our troops weren’t doing what they do. I had always had a desire to tour with the USO, not only because my father was a veteran but because I wanted our troops to know that they are in our hearts and minds always, and how grateful I personally am for their courageous service, which affords me the life of freedom I so enjoy.

"To have been able to visit and talk with our men and women who serve and see what their life is like on a daily basis was humbling, inspiring and truly life-changing. I’m so grateful to the USO for making it possible.”

Craig Stammen, professional baseball player: “When you can make a small, personal sacrifice to get away from your daily activities to bring a smile to those who make an even greater daily sacrifice, you are truly able to understand and appreciate the men and women of the military. They work day and night, without any recognition of the outstanding job they do. Getting to experience a piece of their daily lives on the 2012 USO Holiday Tour with [retired Army General Martin Dempsey] allowed me to realize what service really means, and it inspired me to become as much of a servant-leader as I can in my daily endeavors.” 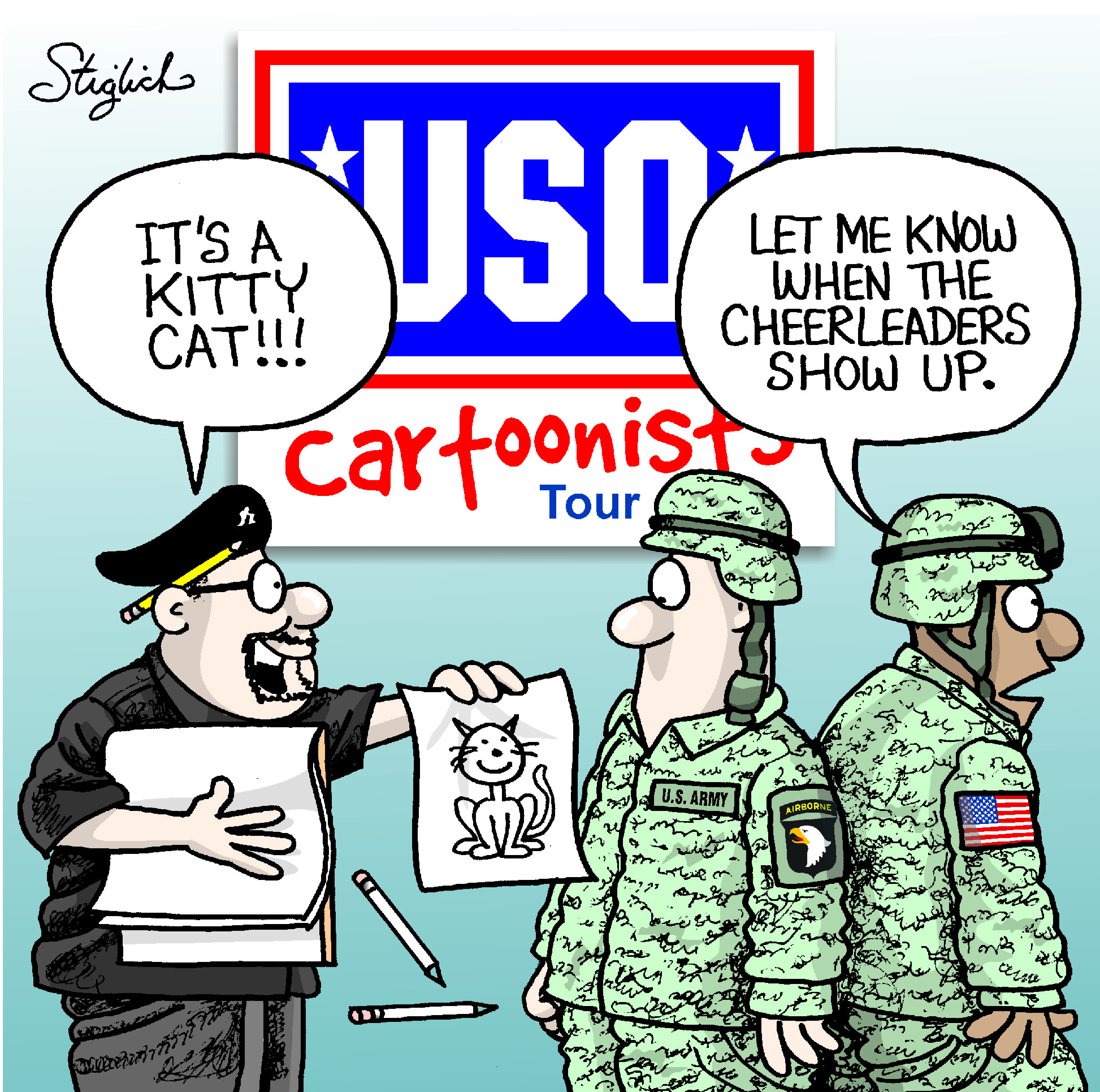 Tom Stiglich, cartoonist: “The first camp we visited in Iraq 2010 was Camp Adder—pretty much in the middle of nowhere. I had mentioned to one of the soldiers how I couldn’t take the heat. It was a dry 103 degrees. She said it’s actually cooling down.

"That night … it was dark—darker than dark, and I had to make a trip to the latrine where everyone walks around naked. (This is where I made up my mind the military is not for me.) On the way back, I got lost for a good 20 minutes. Again, it was pitch black and everything looked exactly the same. After wandering around in my [Philadelphia] Phillies shorts, flip-flops and a T-shirt, a soldier on guard detail flashed his light on me and asked where I was supposed to be. Trying to make light of the situation I answered, ‘Philadelphia.’ He laughed and said, 'You must be one of the cartoonists.’

"Thanks and best wishes always! Looking forward to new adventures with the USO in 2016!” Elmo, Muppet: “Elmo’s favorite part [of his tours with the USO] was visiting with his military friends and learning about all of the different bases there are around the country!”

Katie, Muppet: “I remember when I was sad about moving around so much, but then I met so many new and wonderful friends who helped me learn that changing and moving can be fun!”

Dr. Jeanette Betancourt, Sesame Workshop: “When we created Katie, we knew we had to do so in a sensitive manner and one that acknowledged the different feelings that can happen. Katie is a way to inspire hope while also addressing the big feelings. In so doing, I wanted that our show experience left audiences with a sense of comfort, a sense that every military family and their children know they are not alone and that USO and Sesame Workshop are there to support them as a family.” Iliza Shlesinger, comedian: “Simply put, the men and women of our military give up so much to ensure our everyday freedom, I feel it is my patriotic duty and honor to entertain them. They sacrifice their time and, in many cases, their lives so I can have the freedom to do what I love. Getting the opportunity to come see what their work is like, interact with them and give them a break from their jobs, even if for only an hour or so, is the best way I can personally give back because, let’s face it, I would make a horrible soldier.”

Lewis Black, comedian: “My favorite USO moment, occurred on a base in Iraq, very early in the morning. I was talking to a female soldier who was policing the area. I asked when she was going home. She said that she was supposed to be going home but a close friend of hers—another female soldier’s husband—was being sent to Afghanistan and that their child would be without both … parents.

"Her friend had five months left on her tour. So the woman I was speaking to said that she would stay on in her place, so that her friend could go home. She convinced the base commander to let them change places. The level of such sacrifice left me breathless. I saw all levels of selflessness and sacrifice every day I was among the troops. It truly humbled me. If the rest of us could do just 10 percent of the type of sacrifice our troops give us every day, this country would be a much better place.” Hunter Hayes, musician: “Every experience I’ve had working with the USO has been such an honor and a life-changing experience. To meet these men and women, is so inspiring. These are true heroes. Incredible people. It is a privilege to have the chance to connect with them and share our gratitude through whatever way we can. In our case it’s music.

"It’s important that I use my love of music for good things and showing appreciation to our men and women is one of the most important ways to use the power of music. We want to thank them, we want to lift them up and celebrate what they do and who they are.” Vince Vaughn, actor: “I have so many good memories from my tours with the USO. I always want the troops to be reminded that they matter to me and so many Americans.”

Roy Wood Jr., comedian: “I think it’s important to take time out of your life to venture overseas from time to time because it helps to keep in perspective how fortunate you have it here at home while at the same time being able to deliver a slice of sanity from home to a group of strangers. It’s a responsibility that I don’t take lightly.” Anthony Hamilton, musician: “I believe when people are committed to protecting you, your family and everyone in this country, I want to be able to give them a part of me as a Thank You for all that [they] do. We lose lives and can’t replace them, so if my music can help, I’m there.”

LeAnn Tweeden, model and TV host: “The USO will forever have a place in my heart. They have always looked out for our troops and their families at home. I never wore the uniform, but I found my way of serving and the USO helped me do that.” 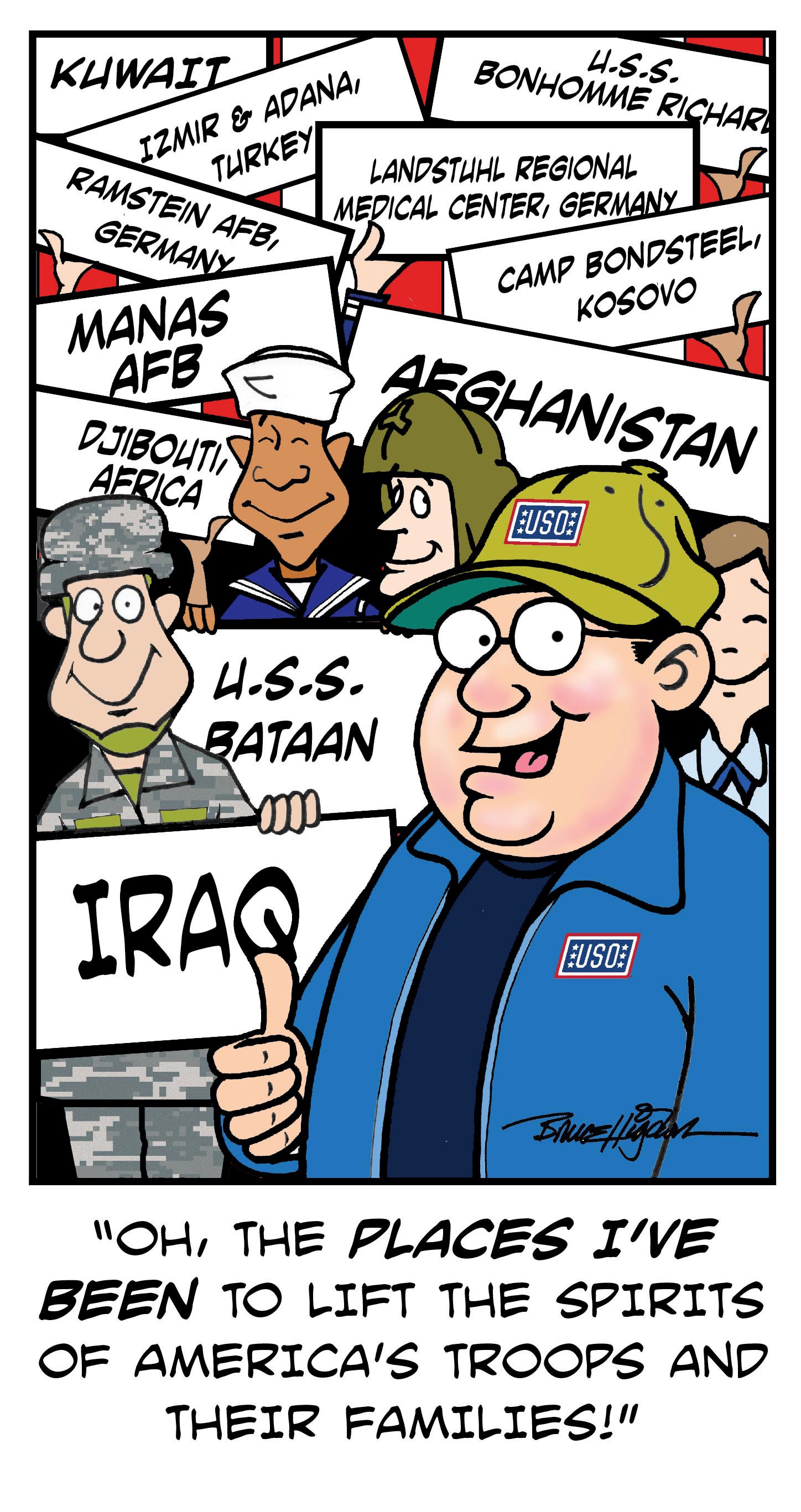