Isaac Strausbaugh is an independent guy.

But an airborne training accident—and a subsequent partial knee replacement—changed some of that.

“I think the hardest thing was to let [my wife] mow the grass,” Strausbaugh said at October’s USO Caregivers Seminar in Tacoma, Washington. “It’s my thing. I have a way of doing it. And she goes out there and mows it and I’m just like, ‘Noooo! That’s not how I do it!’”

The injury forced Strausbaugh, an Army specialist and paratrooper, into a long rehab and a pending medical retirement.

While the sudden end of his military career is an anomaly, he’s still one of roughly 200,000 service members who’ll leave the military in the next year. That’s a lot of people moving between a life of service and regimented teamwork to a civilian economy built on competition and self-promotion.

“I was a paratrooper and I had air assault school,” Strausbaugh said. “That’s not going to help you sell cars or work at Lowe’s.

“So many veterans think, ‘I didn’t really do anything in the military.’ … But really we’ve learned so much, we just don’t know how to put it into civilian terms.”

“When you think about the fact that I grew up around the military community as a kid, went to a service academy and then served in uniform, the transition was tough,” said Alan Reyes, the USO’s senior vice president of operations, programs and entertainment and a captain in the Navy Reserve. “It was learning a new lingo [and] understanding a different culture. And when I made the decision to leave in [1998], there weren’t a lot of programs in place to help to acclimate folks.”

Reyes graduated from the United States Naval Academy in 1990 and served on active duty for eight years before leaving to get a master’s degree in business. Now, he’s in charge of the USO’s efforts to ease transition for his veteran peers. 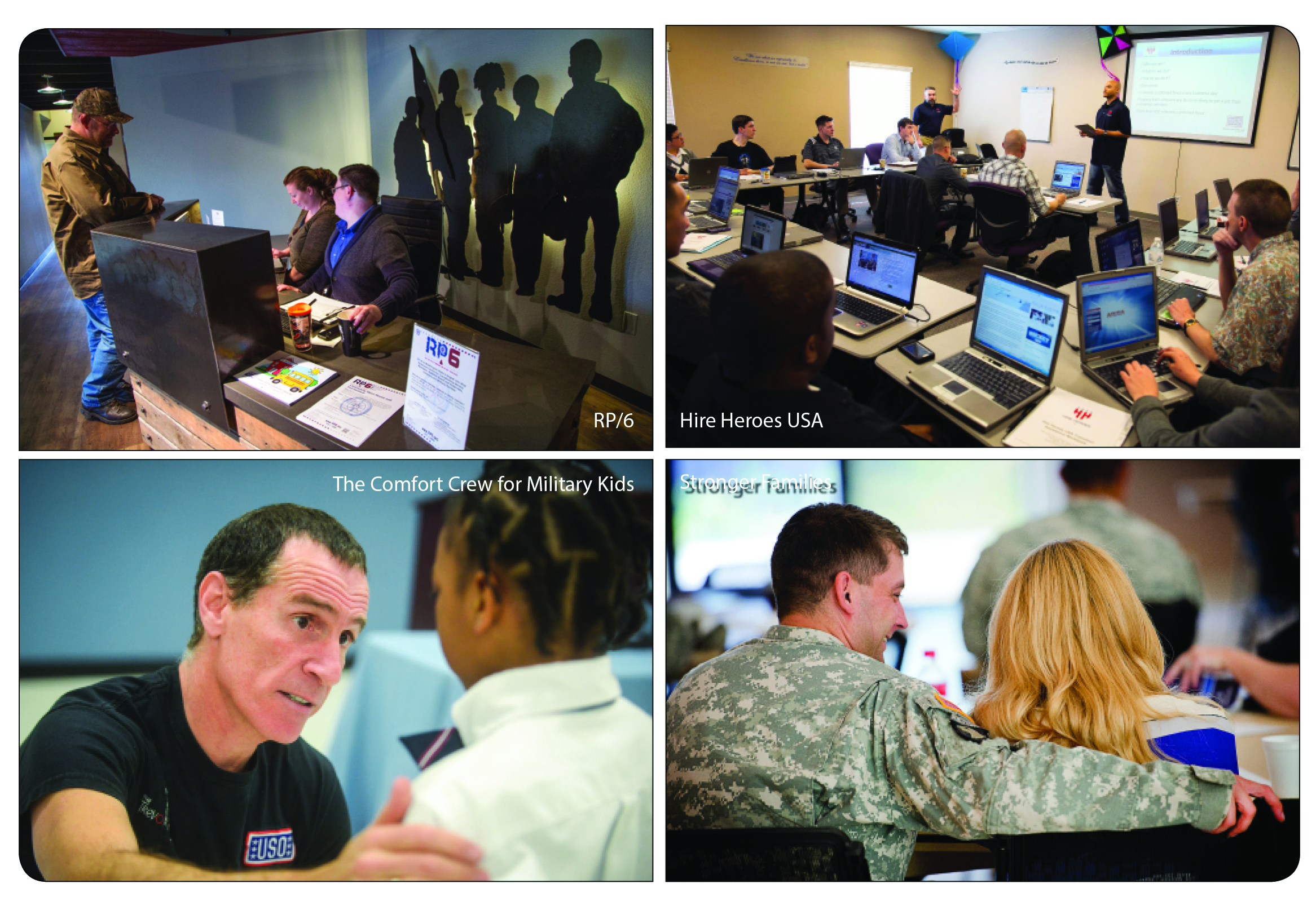 The USO Transition 360 Alliance, launched in May 2015, offers a holistic approach to transition through free employment and family programs via partners Hire Heroes USA, Stronger Families, RP/6 and The Comfort Crew for Military Kids. The alliance offers hundreds of in-person opportunities and workshops each year and is also building out an online portal for each of its services.

“I think the one constant in [transitioning out of the military] is making sure you’re thinking very directly about your plan,” Reyes said. “And that’s not always intuitive for folks.

“In the military—especially in the junior ranks—you’re very much given the plan. You’re told ‘This is the mission. This is what you’re going to execute. These are the actions you have to take.’ As you make a transition, you really have to think about that for yourself first. Whether you do that individually, or whether you get some resource support from the military or from organizations like the USO, that’s absolutely the first thing I would recommend.”

The USO partnered with RP/6 to help service members start making those plans early. Transitioning troops and their spouses can visit an RP/6 center or their online portal to find out what resources and organizations are available to help in their community.

Based in Lakewood, Washington, just north of Joint Base Lewis-McChord, the USO’s investment has allowed RP/6 to expand to six centers strategically located near large military hubs around the United States. RP/6 works as a concierge service connecting transitioning military families to the civilian world by helping them address employment, benefits and quality of life issues.

“[Transitioning service members] can come here and find that person [who] will point them in the direction of the resources that they need,” said retired Army Sergeant Major Lee Baleme, who now works as an RP/6 fellow in Lakewood. “From housing issues to employment, school and even family issues, transition from active duty to the civilian [life] has never been an easy nut to crack.”

The alliance features more nuanced services, too, including longtime USO partner Hire Heroes USA. The two nonprofits combine to host scores of transition workshops where service members and spouses can learn resume writing from the ground up, understand civilian employers’ expectations and even polish their business interactions through mock interviews with pre-identified local employers.

Its services continue after the workshops end, with Hire Heroes USA’s career coaches—many of whom are veterans—checking in on participants throughout their job search process.

Your donations help the USO provide programs and services to help military members and their families transition to civilian life.

“I like to tell people that we’re more like a life coach,” said Jason Dodge, the veterans’ program manager at Hire Heroes USA’s Alpharetta, Georgia, office. “Everybody has a different background. Everyone has their own barriers to employment. But the one thing we really try to establish is ‘Yes, I can help you with a resume. Yes, I can help you with interview skills. But I can also want to help you as a person.’”

The USO Transition 360 Alliance expands beyond employment needs all the way into the homes of military families.

The Comfort Crew for Military Kids—a longtime USO partner and member of the alliance—goes into schools around the world and talks directly to military dependents about challenges like bullying, deployments and even transition to civilian life.

“There’s already a high degree of pressure and stress in [military relationships],” Stronger Families Executive Director Noel Meador said. “And when you add in deployment, reintegration, all those things combined can put a lot of pressure and stress on a military family. For us to be able to come in and offer practical, very helpful ways to alleviate that pressure and the stress [and] also help them be successful in their most important relationships is [crucial].”

—USO Multimedia Journalist Sandi Moynihan contributed to this story. Eric Brandner is the USO’s director of story development. This story appears in the Spring 2016 issue of On Patrol, the magazine of the USO.