With Thanksgiving a few days away, we’re kicking off our USO Cookbook series with a buttery monkey bread recipe donated by former First Lady Nancy Reagan that you can whip up for your turkey day spread.

Nancy Reagan, America’s first lady from 1981 to 1989, has a special history with the USO. In 1981 Nancy and her husband, former President Ronald Reagan, attended the USO’s 40th anniversary dinner in Washington, which was emceed by longtime USO entertainer Bob Hope.

According to Al Ginepra, a USO spokesman at the time, Nancy Reagan received the award in recognition of her anti-drug abuse work and her dedication to military and civilian families with loved ones unaccounted for in foreign countries.

Throughout her husband’s presidency, she made several other appearances at USO events, including the 1987 USO of Metropolitan Washington-Baltimore gala.

Given her involvement with the USO over the years, it’s no surprise that she decided to donate her famous monkey bread recipe to the 1992 USO Celebrity Cookbook.

There’s no need to be intimated by the idea of whipping up these Thanksgiving dinner rolls. This recipe is basic enough for most novice cook to follow. (Seriously, it’s really difficult to ruin.)

From start to finish, including rising time, this recipe took us four hours to make with minimal elbow grease (especially if you have a stand mixer). Additionally, almost all of the ingredients are common pantry items that together cost about $10.

A few things we noticed while testing out this recipe:

With those tips and tricks in mind, happy cooking! 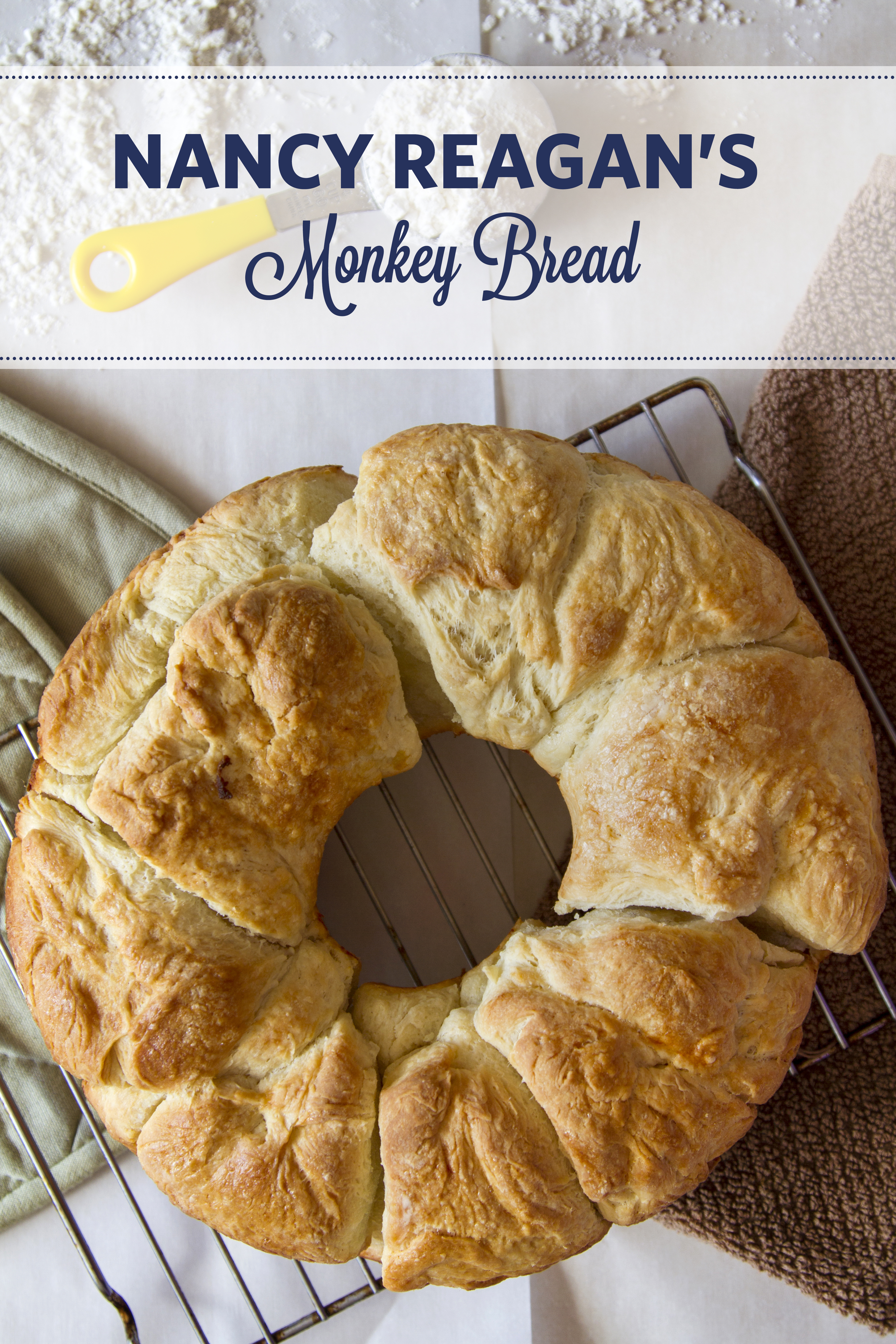 In a small bowl, mix ½ cup of warm (not hot) milk, 1 tablespoon sugar and 1 yeast packet until dissolved. Let sit 5 minutes until frothy/bubbling. In a large bowl (we used a stand mixer for this recipe) beat two eggs. Slowly mix in ½ cup milk, 2 tablespoons sugar and 4 + ½ cups bread flour. Slowly add remaining ¼ cup of milk until a pizza-dough like texture is reached. Slowly knead in the 6 ounces of room-temperature butter and continue kneading for 6 minutes.

Lightly grease a large bowl and place the kneaded dough in it. Cover bowl and place in a warm, damp area and let dough rise 60 to 90 minutes until doubled in size. While dough is rising, melt ½ lb. butter in small bowl. Set aside. Grease bunt pan. Set aside.

When risen, roll dough out onto lightly floured surface. Gently roll dough into a 12x14" rectangle. Cut rectangle into 24 pieces of equal size and roll pieces into spheres. Fully coat each piece in melted butter and place in greased bunt pan. Let dough rise in bunt ban for 30 minutes.

Bake monkey bread in oven until golden brown, approximately 25 to 30 minutes. Let cool completely. Turn bread out onto cutting board and pull apart to serve.