In honor of Women’s History Month, we’re looking back at some of the famous females who have helped shape the history of the USO. From World War II to today, these nine women are just a few of the many who have traveled near and far to entertain service members at home and abroad.

Many of the photos below haven’t been published in decades – if at all – so it’s unlikely you’ll find them anywhere else.

In 1954, when actress Marilyn Monroe was on her honeymoon in Japan with her new husband, New York Yankees legend Joe DiMaggio, she flew to South Korea to perform for the American troops there shortly after the Korean Armistice Agreement was signed.

The memories Dinah Shore created for the service members who saw her perform on USO tours left lasting impressions. Shore, a polio survivor who overcame a limp caused by the disease, unwittingly earned the nickname Dinah when a disc jockey heard her sing Ethel Water’s “Dinah” during an audition. He couldn’t remember the up-and-comer’s name, so he called her the “Dinah girl.” It stuck throughout her more than 50 years in entertainment. 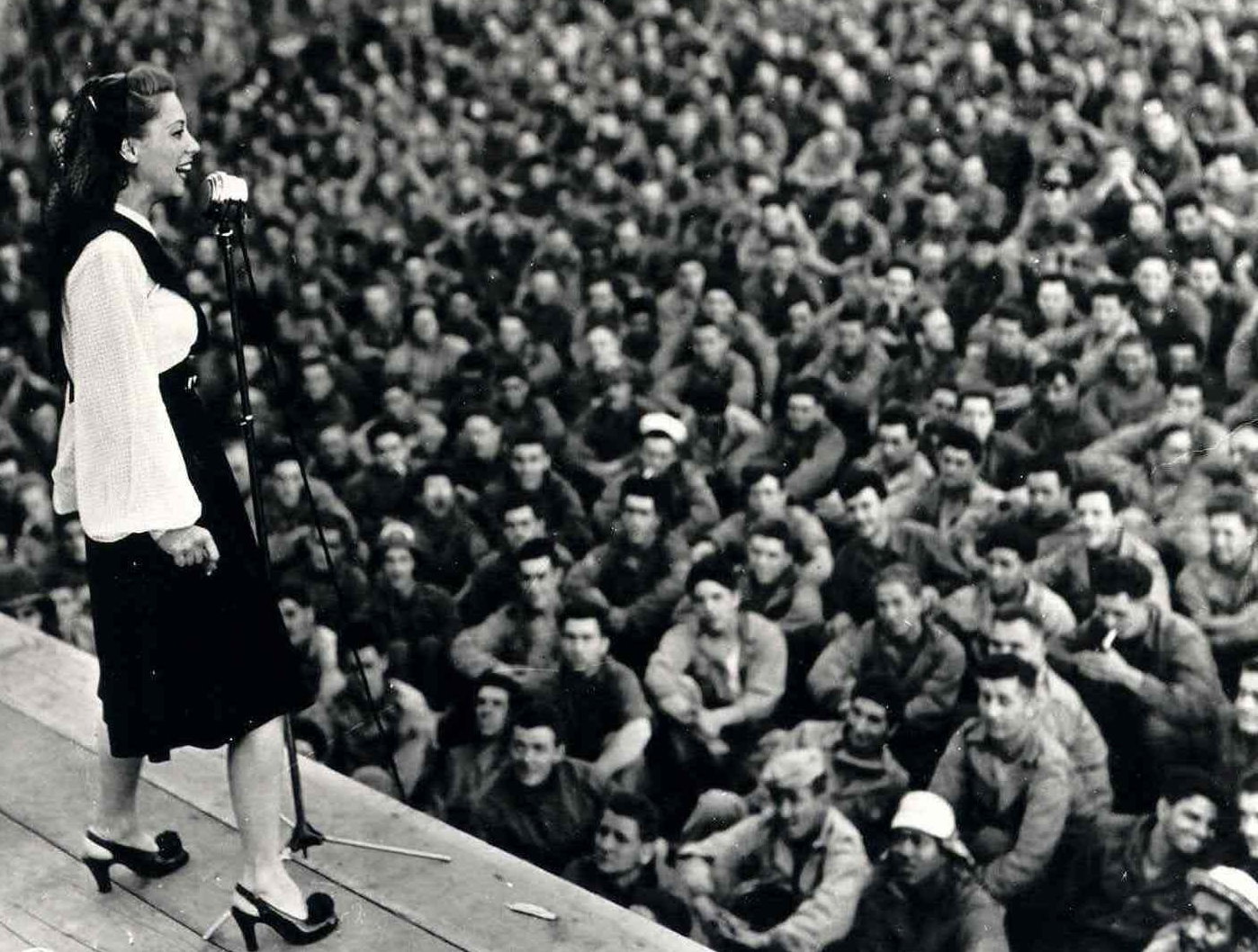 According to the Library of Congress, “Marlene Dietrich made two overseas USO tours. The first was to North Africa and Italy, where she became the first entertainer to reach rescued soldiers at Anzio. During her second tour, lasting 11 months, she entertained near the front in France and Germany.”

Marlene Dietrich takes time out to chat with service women in France in November 1944.

Joan Crawford, an actress whose 80-plus film credits spanned four decades, began supporting the USO during World War II, and continued her work with the organization into the 1970s. In March 1965, she was the first recipient of the USO Woman of the Year Award, according to Brandeis University. When Crawford died in 1977, the USO was one of the beneficiaries of her will, according to Vanity Fair. 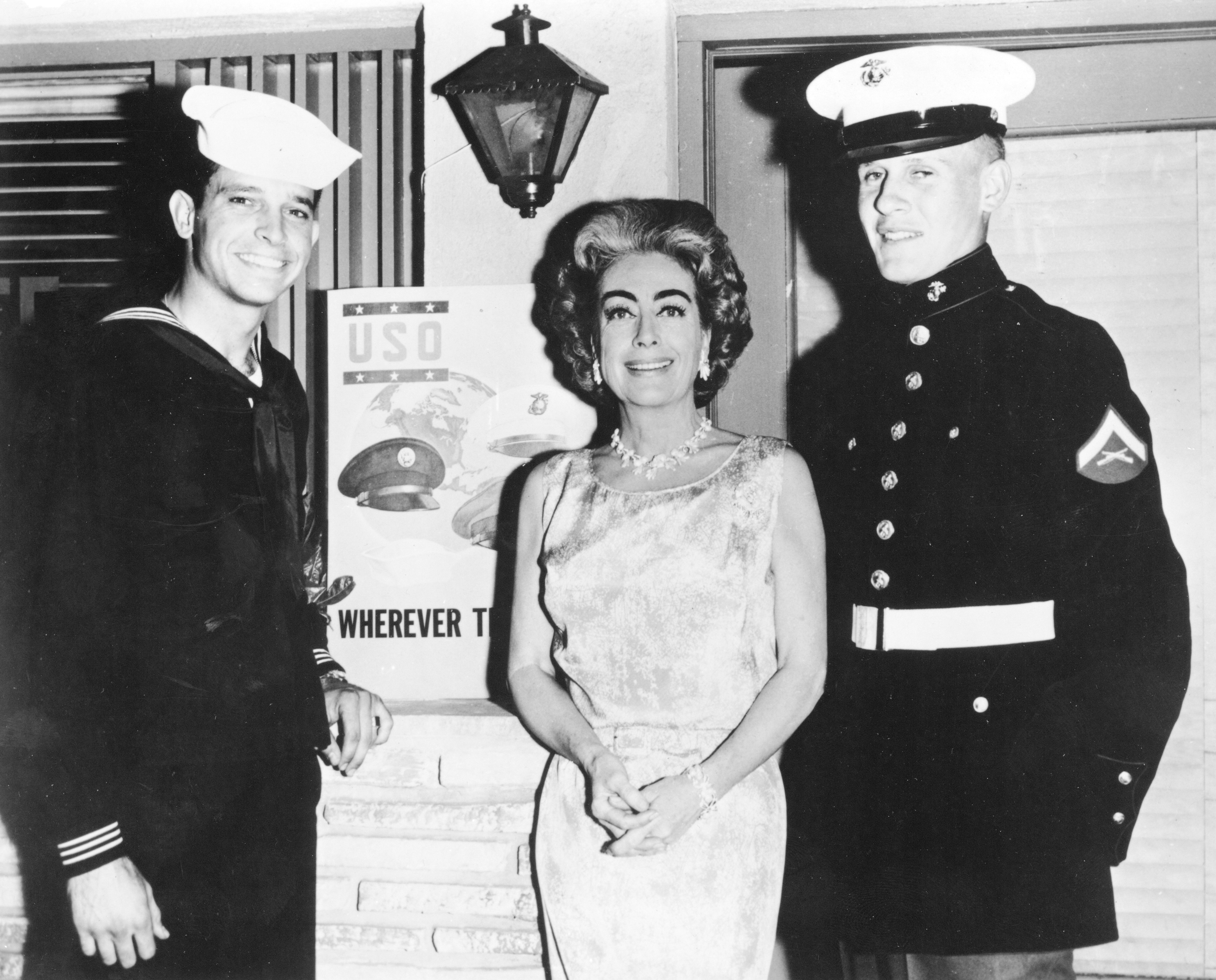 Lola Falana, a singer, dancer, model and actress, traveled to Vietnam with Bob Hope and the USO several times to entertain deployed troops.

Lola Falana performs for the troops at a USO show in Vietnam in 1970.

Raquel Welch teamed up with Bob Hope and others in 1967 and traveled to Saigon, Vietnam, to perform a TV special. According to Vietnam Magazine, Welch joined Hope on stage to add a few crowd-pleasing dance moves to his rendition of “Dancing in the Streets.” Scroll down to watch Welch’s solo performance from that 1967 show.

Raquel Welch performs in Vietnam during a 1967 USO tour.

Diahann Carroll, who was the first African American woman to star in her own television series when “Julia” debuted in 1968, went on many USO tours over the years to entertain American troops.

Diahann Carroll dances on stage with Bob Hope, right, during a taping of a USO show aboard USS Iwo Jima in 1979.

Country music legend Loretta Lynn, who went overseas with the USO in 1983 and 1986, headlined our 1988 Christmas tour with her friend, Conway Twitty.

“I guess it’s kind of special to me, like having a grandchild,” she said in a UPI story. “I see the boys, see how happy they’re acting when I get there.”

Loretta Lynn watches airplanes take off and land aboard an aircraft carrier in 1986.

Martha Raye’s support of the military began in 1942 with a request to travel to England to entertain the troops. She kept up her morale-boosting tours through the Korean War and had the troops in stitches during Vietnam and sometimes pulled rank—though her Marine Corps and Army ranks and membership in the Green Berets were all honorary.

Though the performer loved the boys as much as they loved her, she had a special bond with the Special Forces.

“Maggie … helped everybody she could in Vietnam,” Tom Squier, a veteran and a friend of Raye’s, told Soldiers Magazine. “She told jokes and played cards with us, treated our wounds … She was one of us.”

Martha Raye entertains troops on a USO tour to Vietnam in 1970.