For the next installment of Combat Cooking, the USO Camp Arifjan team in Kuwait shared their coveted chocolate cookie recipe and offered a few tips and tricks for whipping up these homemade treats in a non-traditional kitchen like the one at the USO center.

“It was just fate,“ Reed said.

“We adapted it from one [recipe] that we found online and we just added to it, took away from [it] and made it our own. Then [we] started making it [all the time].”

While some USO Southwest Asia locations like USO Kandahar have to use all non-perishable ingredients in their recipes, volunteers at USO Camp Arifjan have the luxury of requesting fresh ingredients for their recipes from USO staffers who regularly travel off-base to shop for groceries in Kuwait City.

Even with the added bonus of fresh eggs, butter and milk, Reed and Taxon admitted that cooking in the center, which doesn’t have a full kitchen, takes some getting used to.

For example, because the USO Camp Arifjan oven only goes up to 275°F – most cookies are baked at 350°F or higher – Reed said she simply leaves each batch in the oven for a few minutes longer than a standard cookie recipe says.

“You learn,” Reed said. “You figure out what works and what doesn’t work.”

Even if their treats don’t come out perfectly every time, like they would back home, Taxon said it’s the company, and not the food, that keeps her coming back to volunteer and cook at the USO.

“Honestly, [my favorite thing is] the people that I’ve met while volunteering,” Taxon said. 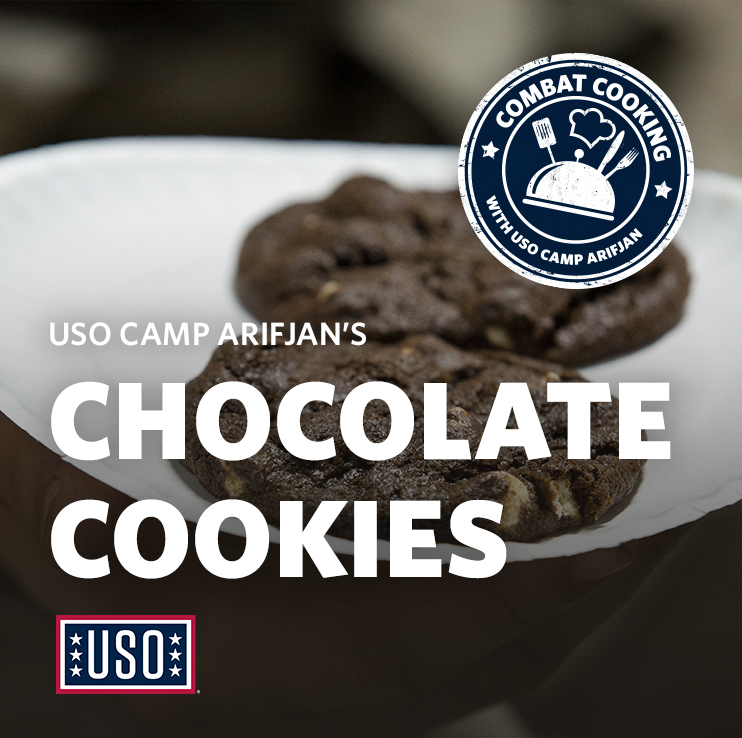 Preheat the oven to 275°F. Place a sheet of parchment paper on a cookie sheet and set aside.

In a large bowl, cream the butter, sugar, eggs and vanilla. Set the bowl aside.

In a medium bowl, mix the flour, cocoa powder, baking soda and salt. Carefully combine the flour mixture with the butter and sugar mixture, stirring until smooth. Add in the white chocolate chips, making sure not to over-stir.

With clean, greased hands, take 2 tablespoons of the cookie dough and flatten it into a disk with your hands. Spoon 2 teaspoons of Nutella on top of the dough disk and wrap the dough around the Nutella, almost like a dumpling. Place the filled dough ball on the baking sheet. Continue process until dough is all gone.

Place the cookie sheet in the oven and bake at 275°F for 40 minutes. Let cool completely.

Leftovers can be stored in an airtight container at room temperature for 3-5 days or up to one week in the fridge.

Let’s stay in touch. Sign up for our emails.