#1. Celebrating the birth of their corps. On Nov. 1, 1921, Gen. John A. Lejeune issued Marine Corps Order No. 47, which summarized the history, mission, and tradition of the Corps, and directed that the order be read to every command on Nov. 10 each year.

#2. Distinguished in combat. Marine Cpl. Jason Dunham saved two fellow Marines in Iraq by covering a live grenade with his helmet and body. An Arleigh Burke-class destroyer in the United States Navy was later named after him.

#3. Dressed to kill. While this may not be the most scientific source, the website Cafemom took a poll and determined the Marine Corps Dress Blues are by far the sexiest military uniform.

#4. Single and looking. Of the five armed services the Marine Corps has the lowest percentage of married personnel.

#5. Yet always faithful. The Marine Corps divorce rate currently stands at only 2.6 percent, the lowest divorce rate of all the armed services personnel.

#6. Staying sharp. The Marine Corps has a required reading list partitioned by rank, which includes fact and fiction, war histories, biographies and even the U.S. Constitution.

#7. Strategically irreverent. On the eve of battle in Saipan, 18-year-old Mexican-American Marine Pvt. Guy Gabaldon, who could speak only a small amount of Japanese, disobeyed direct orders and left his post, but returned with a few Japanese prisoners. He was reprimanded and threatened with a court-martial but that didn’t stop him. The next night he went out and did it again. He would sneak up to the mouth of an enemy cave, toss in a grenade or shoot the enemy guards outside, move off to one side and yell in Japanese, “You’re surrounded and have no choice but to surrender. Come out, and you will not be killed!” He returned with 50 more Japanese prisoners. As a result, Gabaldon was permitted by his commanding officer to continue his lone-wolf operation. The next day, on July 8, 1944, Gabaldon captured two more enemy guards. He convinced one of them to return to his cave with an offering of surrender. Shortly thereafter, a Japanese officer surrendered 800 more Japanese soldiers. Overall Gabaldon, nicknamed “The Pied Piper of Saipan,” was credited with single-handedly capturing (and saving the lives of) more than 1,500 Japanese soldiers and civilians.

Like what you’re reading? Why not join the cause? Donate today to support America’s troops.

#8. Rooted in tradition. This year marks the 100th anniversary of the establishment of the Marine Corps Recruit Depot on Parris Island, where Marines are made.

#10. Not always out for blood. Marine snipers aren’t always deployed to kill. They may also be employed destroying enemy radios, fuel tanks, aircraft, trucks and other equipment. 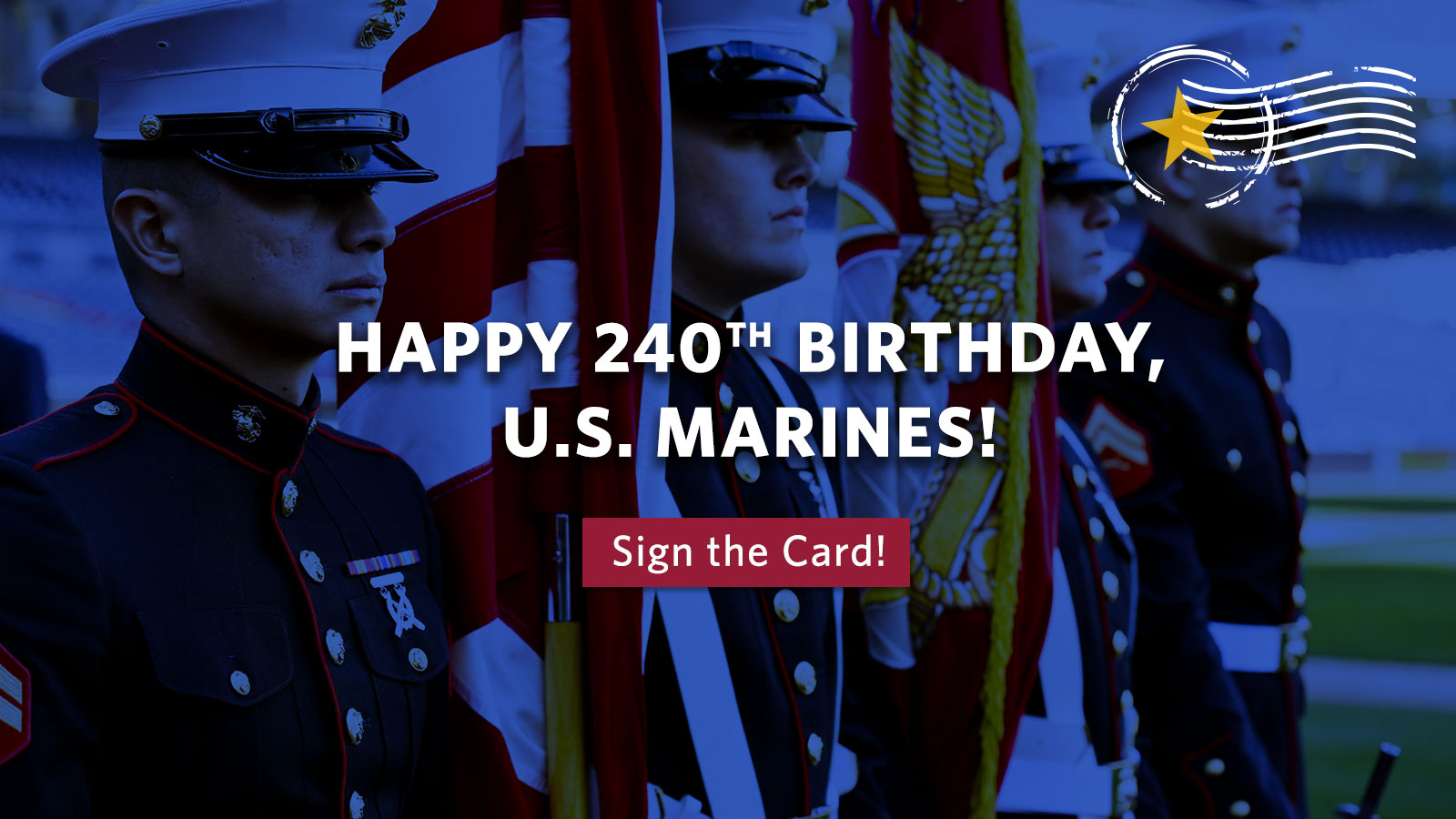 #11. Every Marine a rifleman. Every enlisted Marine must pass The Crucible, which simulates combat conditions and gives the recruit an idea of what to expect in a combat environment. The emphasis is on stress, alertness and field craft.

#12. More than one Chesty? Many know of Marine Corps Gen. Lewis B. Puller, but there’s another legendary Marine general who could have received the same nickname. Maj. Gen. Smedley Butler – one of the few Marines to ever be awarded two Medals of Honor – had a giant eagle, globe and anchor tattooed across his chest while stationed in the Philippines. His nicknames, however, were “Old Gimlet Eye” and “Old Duckboard.” “I selected an enormous Marine Corps emblem to be tattooed across my chest,” he once said. “It required several sittings and hurt me like the devil, but the finished product was worth the pain. I blazed triumphantly forth, a Marine from throat to waist. The emblem is still with me. Nothing on earth but skinning will remove it.”

#13. Most have battle scars During the Chinese Boxer Rebellion, Butler was hit by a Chinese bullet which ricocheted off a wall and took with it a piece of Butler’s tattoo. “It cleared South America off my chest,” he said. Little did he know the Banana Wars would soon begin and South America was far from off his chest.

#14. Cleaning up Philadelphia After returning home from World War I, Butler was controversially assigned to a civilian law enforcement position - director of public safety - by President Calvin Coolidge with orders to clean up the streets of Philadelphia during prohibition. While effective in reducing crime, his methods were not exactly civil, as he often encouraged police violence. “Cleaning up Philadelphia was worse than any battle I was ever in,” he said after he returned to active duty.

#15. Unafraid to speak their mind. After he retired from the military, Butler became a vocal opponent of war profiteering and military interventionism. His outspoken beliefs as a veteran of the Banana Wars gained him the admiration of many veterans. In 1935, Butler authored the book “War is a Racket,” in which he criticized the use of the military to further business interests, echoing later calls against the military-industrial complex.

#16. Hilarious when they do. Comedians Rob Riggle (above) and Drew Carey are just a few celebrities who’ve served in the Marines and also taken the time to entertain service members on USO tours.

#17. Yes, they invented Taco Bell. Another person you probably didn’t know was a Marine: Taco Bell founder Glen William Bell, Jr., who served in the Marine Corps during World War II. Bell left the military in 1946 and opened his first series of hotdog and hamburger stands. In the 1960s he shifted his focus to tacos and by 1978 the then-868-restaurant chain was sold to PepsiCo for $125 million in stock.

#18. First battle as Americans. The Marines’ first land battle on foreign soil after the signing of the Declaration of Independence was in Libya, where a small band of Marines marched 600 miles to storm the city of Derna (or “Derne”) to rescue the crew of the USS Philadelphia from pirates.

#19. Who needs an assault weapon? Maj. Gen. Ray “E-Tool” Smith earned his unusual nickname in Vietnam while in close combat with enemy forces. When his firearm went out of commission, he resorted to his E-tool as a weapon to dispatch an enemy soldier. (An “E-tool” - short for entrenching tool - is a small, foldable shovel.) He also earned the Navy Cross by throwing himself over a barbed wire fence while under fire so that his Vietnamese Marines could use his prostrated body as a bridge.

#20. Leaders from within. All Marines aspire to live up to 14 leadership traits which spell out the acronym JJ DID TIE BUCKLE.

#21. Strange vocabularies. Scuttlebutt is a word Marines use to describe both rumors and drinking fountains.

#23. They drink cobra blood. Thai Marines instruct U.S. Marines in a day of jungle-survival training as part of the annual Cobra Gold exercise. The training culminates with the U.S. Marines participating in a Thai warrior ritual that involves cutting a cobra’s head off and drinking its blood.

#24. When not drinking cobra blood, they eat this. The Official USMC Food Service Association Recipe of SOS, extracted from the USMC Recipe Manual, NAVMC 1067-SD, circa 1952 is as follows:

Cook the meat in its own fat until brown, stirring frequently. Cook onions in bacon fat, add flour and blend thoroughly. Mix milk and beef stock and heat. Add hot milk mixture to fat and flour mixture. Heat to boiling point; boil one minute, stirring constantly. Add salt, MSG and pepper. Pour sauce over meat. Simmer until meat is well done, but not over cooked. Serve over toast points or biscuits.