The Stories Behind the Modern Military Salute

When it comes to the military salute, everyone seems to agree on two things: (1) it’s always a sign of camaraderie, and (2) no one knows its exact origin. But everyone has a theory.

The origins of the hand salute

Let’s start with the practical application: raising the right hand to one’s cap or forehead is not only a gesture of respect, but also a signal that you’re not wielding a weapon (which was far more important information a few centuries ago than it is in today’s military settings). Some believe the hand salute is the evolution of a gesture dating back a few thousand years, to when assassins were more prevalent in both military and government circles.

There are other theories, too, dating back to medieval times. The most popular theory involves knights lifting their visors, to identify themselves to superiors.

Ancient customs aside, it’s also reasonable to infer that the modern military salute is a replacement gesture for removing one’s hat in the presence of a superior. According to the U.S. Army Quartermaster Center and School, a British order book from 1745 dictates “men are ordered not to pull off their hats when they pass an officer, or to speak to them, but only to clap up their hands and bow as they pass.” A page on the Quartermasters’ website explains that military headgear had become so complicated and cumbersome by the time of the American Revolution, saluting was just an expedient change to protocol. 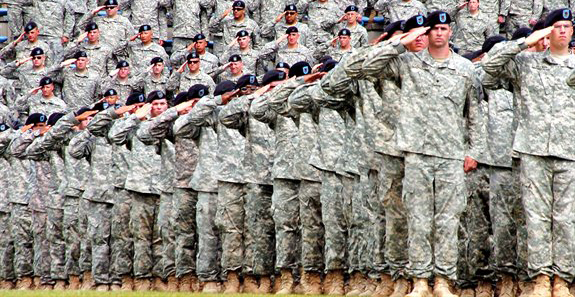 According to the Armed Forces History Museum, today’s standard salute – right hand touching the brim of the head cover with the palm down – was in place by 1820. The museum says the palm down portion of the salute may have been influenced by the salute style of the British Navy at the time. A sailor's hands were often dirty, and exposing a dirty palm – especially to a superior – would have been deemed disrespectful. A correlating legend has it that Queen Victoria was once saluted with a dirty hand, and declared thereafter that British sailors would salute with their hands at a 90-degree angle.

Who receives a salute?

The following individuals are always entitled to a military salute:

When should a service member give a salute

Civilians have probably witnessed a few of these situations in daily life (especially at a ceremony or a high-profile sporting event). But with rare exception, service members should render salutes in these circumstances:

When can service members skip a military salute?

There’s protocol, and then there’s practicality. Military salutes are not required when addressing a prisoner, when someone is in civilian clothing, or when it would be tough or inappropriate to execute (for example, when someone is carrying equipment in both hands or performing a complex task). Also, salutes are not usually required indoors, unless reporting to an officer while on guard duty, participating in an official ceremony, or reporting to a commander or a military board.

For a more nuanced look at military salute rules, you can search for the specific regulations on honors and salutes for each service, like those of the Army.

Should civilians perform a hand salute when they see a service member?

Service members don’t expect salutes from civilians, even if those civilians are military employees or contractors. In fact, it could actually create an awkward moment, unless the service member knows the civilian doing the saluting or recognizes the civilian to be a veteran. However, there aren’t any restrictions against saluting, either. The First Amendment’s protection of free speech and expression gives civilians the ability to do what they want when greeting anyone, including a military salute.

Our advice? Smile. Maybe say “hello.” If you’re so inclined, shake a service member or veteran’s hand, and thank them for their service. You can do even more to thank your service members by sending a message of support to active troops around the world, or by donating today to the USO.