In an interview with Army SGT Philip Romero about the invisible wounds of war, he told the USO that it’s difficult to explain complex wartime emotions to his wife.

Romero suffers from post-traumatic stress.  “My wife asks me … ‘Why don’t you talk to me about it?” he says.  “How am I supposed to tell my wife that I’m sorry I didn’t die and two younger guys could have made it home? How do you explain that?”

Romero’s silence and bouts of anger are not uncommon in military marriages, particularly those where a spouse is dealing with PTSD.

“There is a level of stress on wounded warrior couples that seems ten-fold what a normal marriage bears,” said Noel Meador, Executive Director of Stronger Families, creator of a marriage training program called Oxygen. 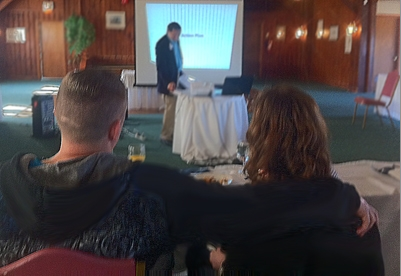 The USO recently teamed up with Stronger Families to provide the workshops free to wounded, ill or injured troops.  It’s a way to tackle tough issues in a non-threatening environment.

“The ability for a spouse to empathize is tremendous,” said Meador, “and that’s really what we’re trying to reinforce… If we can help give couples the tools they need to communicate how they are feeling, we can help them attain a mutual understanding of the problem and work together to diffuse the anger safely.  Eventually couples can come up with an action plan to move forward in their relationships.”