The Stories Behind Military Challenge Coins

They’re one good deed and an open palm away. And they can be kinda heavy.

Challenge coins permeate the military. Almost everyone with a significant rank doles them out. Even the commander-in-chief has a challenge coin.

If you’ve been in the military for a while, you probably have a case or a rack (or a vintage sea chest) to display your coins. Coins reared their heads (or tails) in mainstream culture this spring when the popular design podcast 99% Invisible did an episode on their existence, purpose and history. The podcast even highlighted an oft-repeated awkward civilian moment: the first time a service member shakes their hand and simultaneously plants a coin in their palm.

At the USO, we know a handful of people who have a few (hundred) coins from their years both serving in the military and serving troops and behind every military coin is a pretty cool story. Here are five of them: 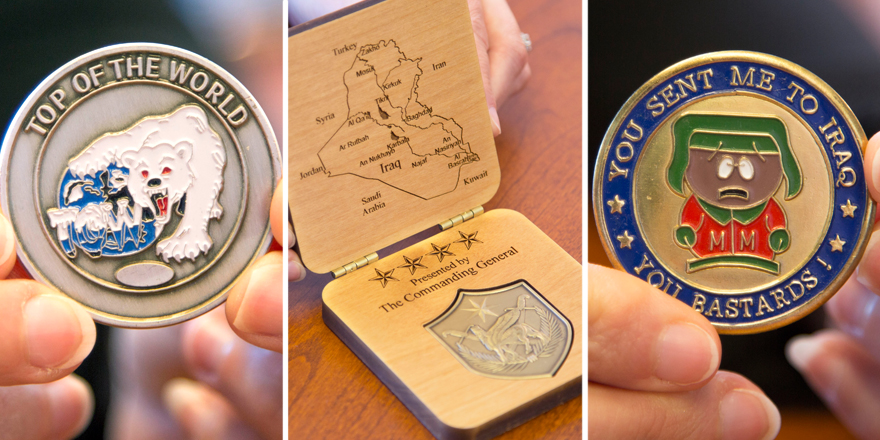 Rachel Tischler has taken more flights into the Middle East than a lot of service members. The USO’s Vice President of Entertainment has traveled the world supporting USO tours, including 15 trips to Iraq. She’s collected a lot of coins along the way, too. Here are the stories behind the three pictured above: 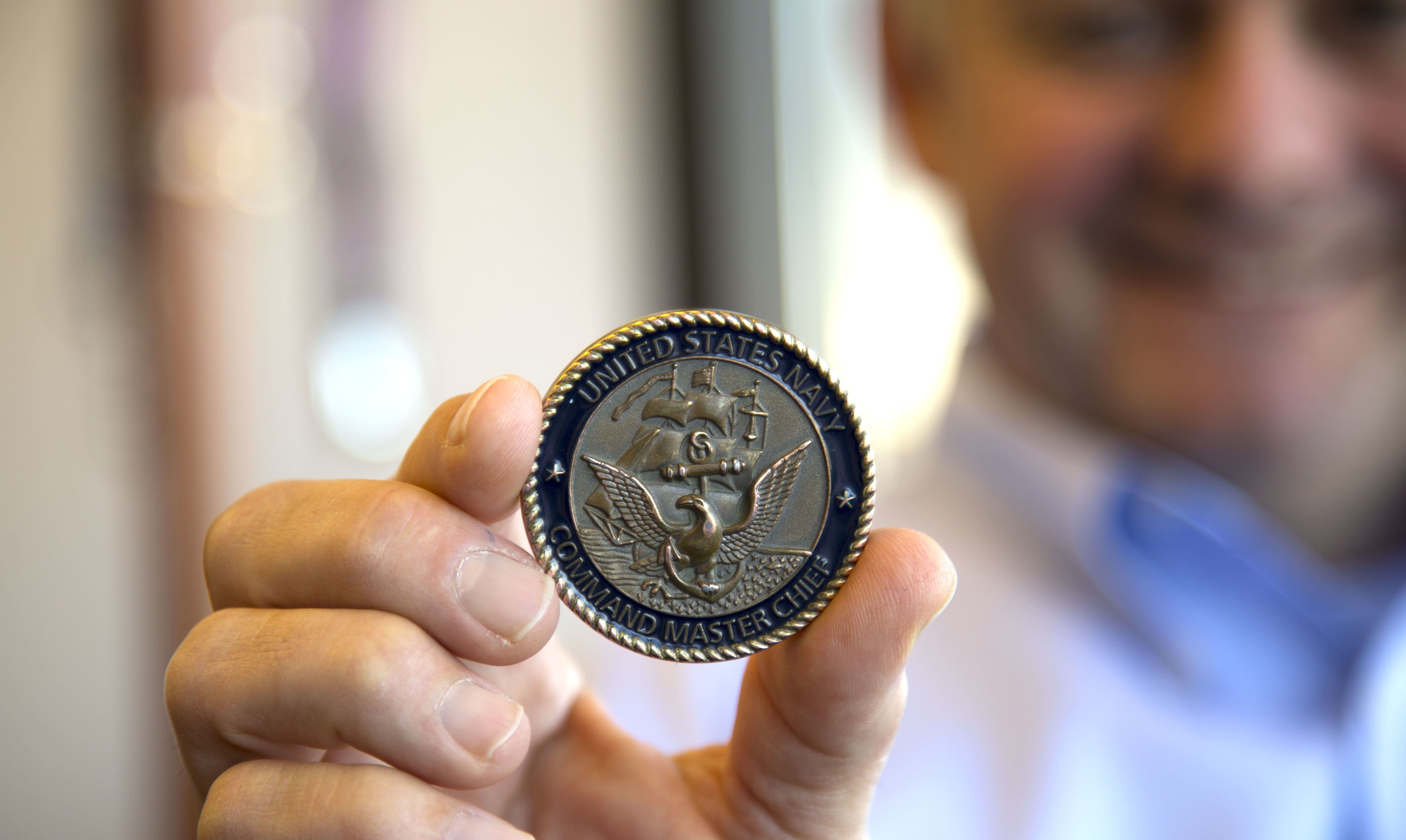 Glenn Welling always has a challenge coin on hand. It’s his own.

“For the first 20 years of my Navy career, I had no concept what [challenge coins were about],” said Welling, the USO’s Vice President of Operations, who recently retired as a command master chief petty officer in the Navy Reserve. “When I was selected to be a command master chief in the Navy, I decided it would be a good idea to have my own coin minted so I could recognize sailors that were part of my organization for exceptional service.”

Welling had 100 personal coins minted before deploying to Iraq in 2008.

“This particular coin has been in my pocket every single day since June of 2008, which is when I left for Iraq,” he said.

Welling said the coin, along with a prayer stone his neighbor gave him that he also still carries each day, “provided me comfort and security while I was deployed.”

He’s scheduled to retire in October after 37 years in the Navy. But he won’t be taking his coin out of his pocket.

“I may not be in uniform anymore, but I’ll always be a sailor,” he said, smiling. “Til the day I die, I’ll carry my coin with me.” 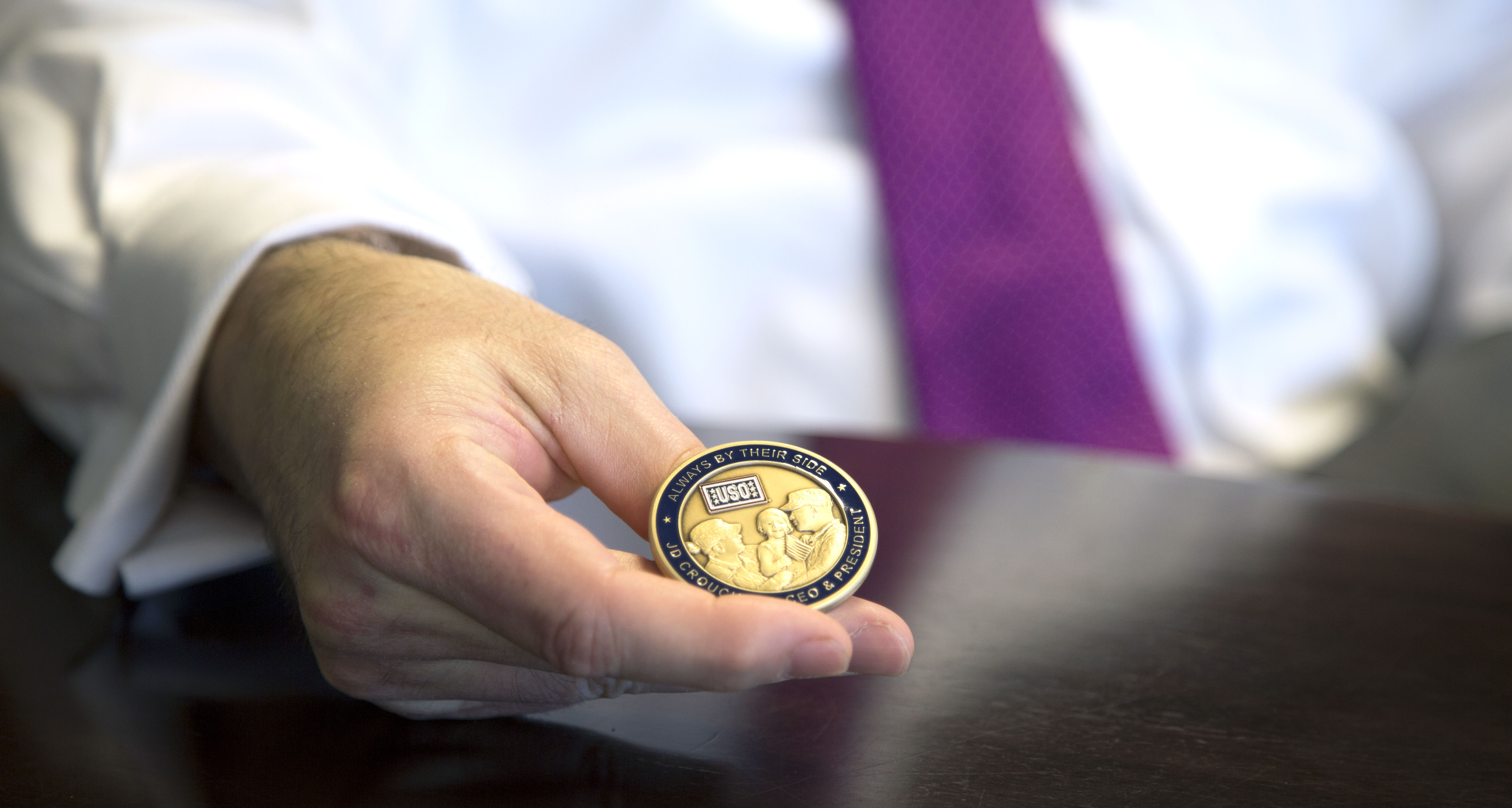 USO CEO and President J.D. Crouch II had a clear direction in mind for his first personal coin.

“[The USO is] a strong support center for that military family – for spouses, for children as well as the people who sort of orbit around that military family,” Crouch said. “So I thought having that at the center of my coin reflects everything we do: The service members themselves and the family members that also serve in their own way. 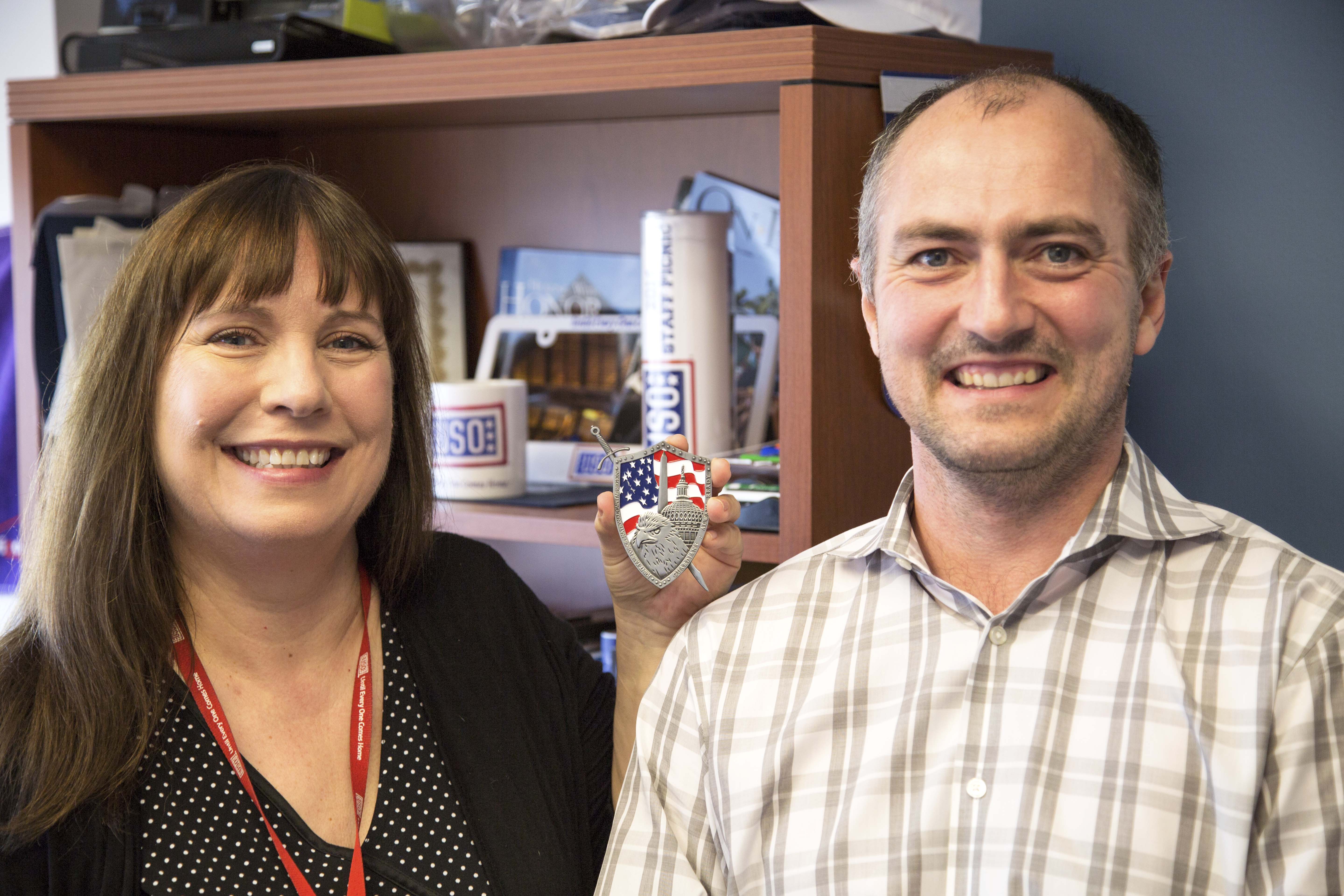 Valerie Donegan and Jonathan Matthews have played critical roles in planning the USO’s computer and facilities infrastructures around the globe, which puts them in some interesting places.

In the photo above, Donegan is holding the coin then-Joint Force Headquarters-National Capital Region commander Maj. Gen. Michael T. Linnington gave them to commemorate their roles in building the USO Warrior and Family Center at Fort Belvoir, Virginia.

Donegan holds a coin she received in Iraq in 2009. | Photo credit Eric Brandner

Donegan and Matthews were installing the USO’s downrange satellite communication system in 2009 when they received the coin in the inset photo at then-Balad Air Base in Iraq. It was a trip they’ll never forget for sobering reasons, including their leg in Afghanistan.

“[That trip was] also where I saw my first dignified transfer,” Donegan said. “We hadn’t been at the [USO Pat Tillman Center] for two hours …”

“And everybody stopped,” Matthews interjected.

“Everybody stopped and you lined up,” Donegan said. “That was my first time ever to see a [dignified transfer] out to a flight line.

“There’s nothing as powerful as standing on that flight line watching those coffins go by. … I think that’s really the first time I understood the role [the USO] plays.” 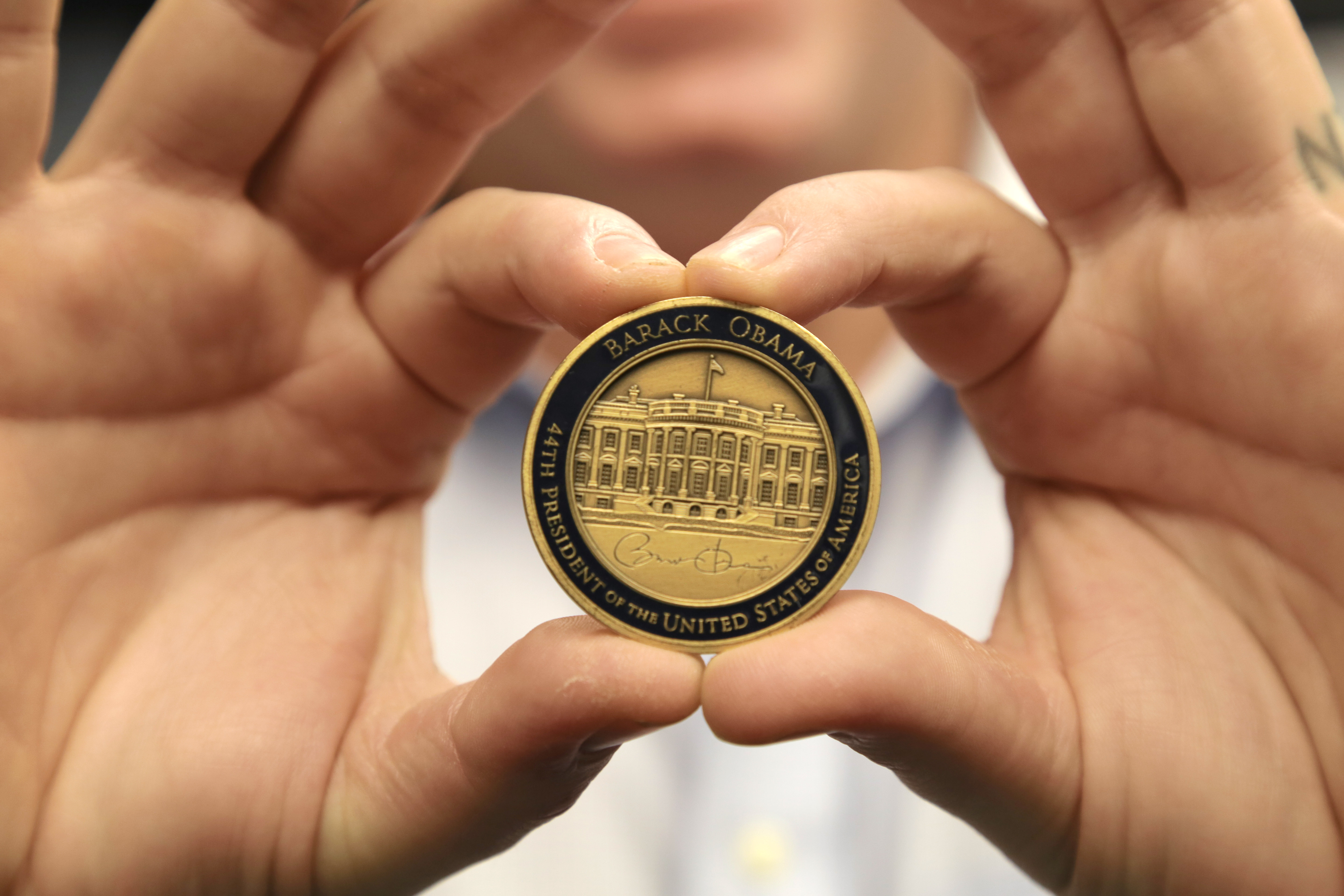 Joseph Andrew Lee has a knack for being in the right place at the right time. It’s a great skill to have if you’re a multimedia journalist like Lee, a gregarious former public affairs Marine who chronicles USO stories.

On Aug. 9, 2011, Lee was working at Dover Air Force Base in the wake of the greatest single-event loss of life U.S. Special Operations has experienced. Three days earlier, a Chinook helicopter carrying 38 coalition troops — including 31 Americans — was shot down in Afghanistan, killing everyone on board. That included 25 special operators. Lee traveled with several fellow employees from the USO’s Arlington, Virginia, offices to do whatever he could to support the mass dignified transfer through USO Delaware. He took a role refilling a cooler of drinks for families, service members and senior officials.

“Our task was to get these grieving families anything they needed,” Lee said.

Three hours in and soaked with sweat after unloading another palate, someone tapped Lee on the shoulder and asked “Hey, you mind if I grab one of those?”

“I looked up and it was the President of the United States,” Lee said.

President Barack Obama took the drink Lee handed him, recognized the USO logo on Lee’s shirt, and struck up a conversation.

“The first words out of his mouth were ‘Thank you for what you do. The USO’s a great organization,‘” Lee said.

Lee told Obama that his USO experiences during his 10 years in the Marine Corps were the reason he decided to work for the nonprofit.

Obama then looked over at an aide who handed him something, turned back, and shook Lee’s hand, placing his presidential challenge coin in Lee’s palm in the process.

“He said ‘Thank you for your service and thank you even more for continuing your service through the USO today,'” Lee said. “And I thought that was pretty special.“

“Obviously that day was nothing to celebrate,” Lee added “Like a lot of medals that Marines receive, it was kind of a reminder of one of the saddest days I’ve served.”