Pro vs. GI Joe - Doin' a Little for Those Who Do a Lot

Story by Addie Zinone, Co-Founder of Pro vs. GI Joe

I have a love-love relationship with the USO. I love the organization as a soldier who benefits greatly from their programs and services, but I also love the USO because, through a unique and mutually beneficial partnership, my husband and I have seen our vision for connecting troops serving around the world through video games become a reality.

I’ve been in the Army Reserve since 2002. I am a Staff Sergeant assigned to the 222d Broadcast Operations Detachment in Los Angeles and I’ve served two tours of duty in Iraq. It is because of my service that my husband (who doesn’t serve) wanted to give back to those of us in uniform. One day in 2007, just a few months before my second tour began, Greg came up with the idea for Pro vs. GI Joe.

Pro vs. GI Joe is a non-profit organization that sets up real-time video game competitions between professional athletes and celebrities and troops serving all over the world via online gaming. In addition to playing games online, we also invite local troops to attend in-person and when possible, we get the friends and families of the troops participating overseas in on the action. Not only do the troops get to compete against their favorite celebrities and athletes but they also get to chat and talk trash via live webcam feed with them and their family members in attendance. It’s a simple idea that produces amazing results.

The reaction to Pro vs. GI Joe events has been nothing short of amazing. From the troops who participate both overseas and stateside, their family and friends, the athletes and celebrities and the USO Centers around the world, everyone seems to have a great experience. We are connecting troops to their heroes on the gridiron and hardwood – despite the thousands of miles that separate them - and we’re doing it through an activity they love – video games.

We are also making history. 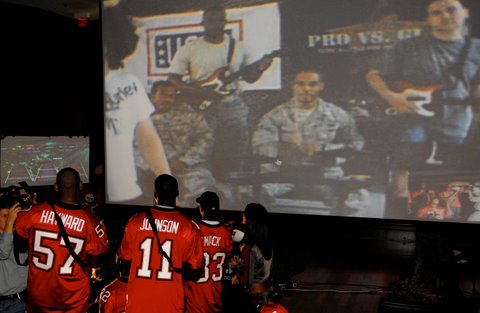 Together, Pro vs. GI Joe and the USO brought online gaming to troops serving in the Middle East for the very first time. Prior to this partnership, online gaming wasn’t available in combat zones. And there has never been anything like Pro vs. GI Joe, a concept that connects soldiers to their communities, in real-time through video games and webcams, from wherever they are stationed in the world. None of this would be possible without the USO and their hardworking and dedicated staff and volunteers who dedicate hours to making these events great for the troops all over the world.

To date, we’ve held Pro vs. GI Joe events at USO centers in Afghanistan, Iraq, Kuwait, Dubai, Japan, Korea, Qatar, Germany and of course in various centers here in the states. We’ve connected troops with athletes from the NBA, NFL, MLB, NASCAR, UFC and IRL while also attending the biggest sporting events in the world. What these events do is allow troops to relax and enjoy a few hours of fun while connecting with their family members and talking trash to their athletic heroes. They walk away with an experience only they get because they choose to wear the uniform and serve our country.

While the experience is great for the troops and their families, it’s usually greater for the athletes because they’re truly humbled by the experience. They are amazed that something so little can do so much. Seeing the smiles on the faces of the troops via webcam while they’re playing Reggie Bush and Shaquille O’Neal is pretty gratifying but seeing the tears and laughter when the game-play is over and the family reunions begin is priceless. It’s truly the reason we do what we do and it’s a privilege to work alongside the USO, an organization whose work inspires us, to continue creating life-long experiences for our military men and women serving around the world.

Click here to see the latest installment of Pro vs. GI Joe on G4’s “Attack of the Show.”

The opinions expressed in this blog are solely those of Addie Zinone and do not necessarily reflect those of the USO.