Peace in the Heart

Today we present the first of what we hope will be many guest blogs for the USO.  Our aim is to bring you compelling stories that might not otherwise be told and hope you’ll share them with others…

Peace in the Heart by Tom Sileo, The Unknown Soldiers

Finally back home after a difficult combat tour in Iraq, 1st Lt. Jim Kirchner sat in a busy TGI Friday’s restaurant with his wife.  While the wounded veteran was happy to be spending time with his family, something was clearly bothering him.  Sissy Kirchner offered a penny for her husband’s thoughts.

“I have to get healed up so I can get back over there,” Jim responded.

Shocked by his answer, Sissy took a moment to regain composure.  Why would her husband want to return to the war-torn country that he barely escaped alive?  After all, Jim still carried a piece of Iraq with him, in the form of shrapnel embedded inside his heart.  1st Lt. Kirchner said that in order to be sure his ordeal had true meaning, he had to see it for himself.

“I wanted to leave the war back in Iraq and not bring it home with me,” he said, while explaining his post-deployment mindset.

A few months later, Sissy read an online article about Operation Proper Exit, the new program funded by the USO and executed by the Troops First Foundation.  The idea was both powerful and creative: give wounded heroes a chance at closure by taking them back to war zones that have left physical and emotional scars.  She immediately forwarded the story to Jim, knowing he would jump at the opportunity.  After speaking with Rick Kell, the program mastermind and Troops First Foundation president, Kirchner later found out he would be returning to Iraq in December 2009, with the third group of wounded veterans to make the emotional voyage.

A little over four years earlier, 1st Lt. Kirchner sat in a guard tower at Forward Operating Base St. Michael, during one of the most difficult periods of the Iraq war.  He was in Mahmudiyah, an area south of Baghdad commonly referred to by troops serving there as the “triangle of death."  There was intelligence indicating an imminent attack by terrorists, and the soldier was ready for action.  Worried about his safety but driven by his sense of duty, Jim put his fears aside and manned his post.

"If it wasn’t me in that tower, it would have been somebody else,” Kirchner said.  “You serve for the men or women beside you.”

Jim was moderately surprised that there were no attacks, and retired to an Army tent to get some sleep before a patrol set to begin in a few hours.  As he tossed and turned while trying to shake off the adrenaline that built up in the guard tower, the soldier flipped over his pillow and reversed his position on the bed.  A few moments later, Kirchner heard a massive booming sound, then felt a strange numbness.  He knew he had been hit.

Shrapnel from a mortar had torn into Jim’s back, from his head all the way down to his knees.  A shoulder and elbow were blown out, and he later found out a lung had collapsed.  There was damage to his liver, pancreas, and heart, and prospects of survival seemed dim.  Due to incredibly dangerous conditions on the ground, flying the badly injured soldier out of FOB St. Michael would be next to impossible, so a risky ambulance ride to the nearest hospital was the only option.  Kirchner, knowing that terrorists would not hesitate to attack a medical caravan, thought he and everyone else in the ambulance would surely be killed.

When Jim miraculously arrived at Camp Anaconda, doctors told him he “probably wasn’t going to make it."  Before losing consciousness, he remembers being asked if he would like to be read his last rites, while "surrounded by guys pumping blood” into his weakening body.  After pulling through in Iraq, Kirchner was flown to Germany, where he said the process was repeated all over again after his condition worsened.  After several surgeries at Landstuhl Regional Medical Center and then Walter Reed Army Medical Center, the wounded veteran was told he would survive.  He was left with scars, no feeling in half an arm, constant pain, and a permanent reminder of his near-death experience whenever he saw an x-ray of his heart.

The way Rick Kell saw it, Kirchner was a perfect candidate for Operation Proper Exit.  While retired from the Army and still struggling with the demons of war, Jim had demonstrated that he wanted to move forward as a husband, father, and private American citizen.  Kell, his Troops First Foundation, the USO, and top military officials like Gen. Ray Odierno and Col. David Sutherland had worked tirelessly to give heroes like Jim this unique chance at closure.

“On these trips, I have seen 18 people change physically in front of my eyes,” Kell said.  “To simply tell you that does not do it justice.”

[caption id=“attachment_1131” align=“aligncenter” width=“500” caption=“1st Lt. Kirchner on the base where he nearly died. A smile on his face shows what Operation Proper Exit is all about.”] 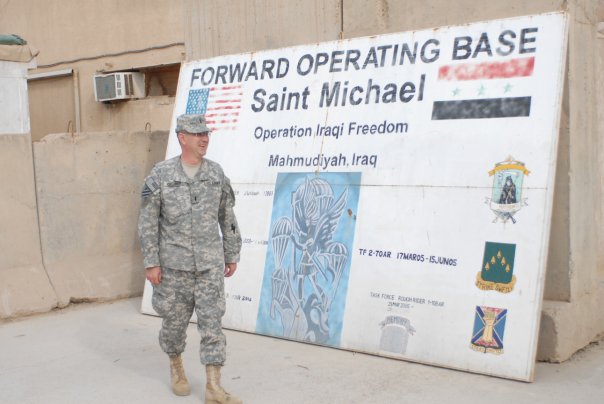 1st Lt. Kirchner travelled back to Iraq along with retired Master Sgt. Tom Carpenter, retired Sgt. Bill Congleton, Sgt. 1st Class Josh Olson, Sgt. 1st Class Mike Schlitz, and Capt. Sam Brown.  Meeting Brown was a unique experience for Kirchner, who had his first face-to-face conversation with a severe burn victim.  The two immediately developed a bond, and Capt. Brown, who was injured in Afghanistan in September 2008, would later get to spend time with his wife, Capt. Amy Brown, during the group’s visit to a Baghdad palace, where the military rolled out the red carpet for the returning heroes.

Despite the serious nature of their wounds and the grief associated with visiting areas where comrades had fallen, the five combat veterans developed a friendly rapport.  They joked around and even teased each other about their injuries.

“It may surprise people that wounded guys pick on each other,” Kirchner said.  “But it helps us all.”

Everywhere the group traveled, U.S. troops of all ranks and backgrounds saluted them and wanted to hear their war stories.  The conversations were positive not just for the participants of Operation Proper Exit, but for morale of the troops on the ground.

“It was phenomenal,” Kirchner explained.  “It didn’t matter where we were, every branch was supporting us.”

While the enthusiasm inside the military meant the world to Kirchner, seeing the changes to daily life in Iraq since he served there is what finally gave Jim’s aching heart peace.

“Going back and being able to talk to the Iraqis had made a difference,” Kirchner said.  “The Iraqi people are now reporting al Qaeda.  They don’t want them there.  That never would have happened back in 2005.”

With his vastly different second trip to Iraq complete, Jim relaxed at home during a wintry day in Douglasville, Georgia.  Now a health physicist for the CDC, Jim is helping Sissy raise their four children and watching his son, Pvt. Dustin Carney, finish training at Fort Gordon.  Carney has made his dad proud, but Kirchner’s real-life war experience has also left him concerned.

“I’m not sure if it’s harder to be deployed yourself or see a loved one get sent overseas,” Jim said.  “I now realize what my wife was going through.”

The chilly February weather makes Kirchner’s constant pain a bit worse, and the shrapnel in his heart isn’t going anywhere.  But unlike many of his fellow wounded warriors, he was able to confront his past so he could have a brighter future, thanks to the Troops First Foundation, USO, and the United States military.  Instead of dwelling on the past, Jim says he cannot wait to see what tomorrow brings.

“A lot of guys want to go back,” Kirchner said.  “I absolutely cherish that I got the chance.”

Tom Sileo is a former CNN journalist who now runs a blog, The Unknown Soldiers, dedicated to unsung heroes of the war on terrorism.  The opinions expressed in this blog are solely those of Tom Sileo and do not necessarily reflect those of the USO.