The USO is saddened to hear of the recent passing of Congressman John Murtha, a huge supporter of the troops and the USO.  Congressman Murtha was the recipient of both the prestigious Spirit of Hope Award, named for Bob Hope and presented for dedication to military-service personnel, in 2000, and our Service Award for support of troops and families during Operation Desert Storm in 1992. 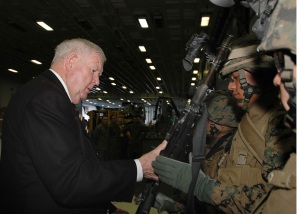 John Patrick Murtha was born on June 17, 1932, and joined the Marines after high school in Westmoreland County, PA.  He attended the University of Pittsburgh on the GI Bill, graduating with a degree in economics, and did graduate work in economics and political science at Indiana University of Pennsylvania.  Murtha voluntarily served in Vietnam from 1966 to 1967, earning a Bronze Star and two Purple Hearts along the way. He was elected to the Pennsylvania House in 1969 and to Congress in 1974. He was retired from the Marine Corps Reserves in 1990 by General Al Gray, Commandant of the Marine Corps, after 38 years of service.

“John Murtha was a great friend of anyone who ever served in uniform,” said Sloan Gibson, president and CEO of the USO. “His hard-nosed and steadfast support of the military helped to ensure that troops got what they needed to do their jobs. We will miss him.”

He built his career in Congress on support of the military, with a particular emphasis on responsible Defense spending.  Just last Saturday he became the Pennsylvania’s longest serving Member of Congress.  He will be remembered for his strength and heroism, both on the battlefield and on Capitol Hill.  We thank him for all he did for the USO.