It's Your USO Stories: Three Doors Down 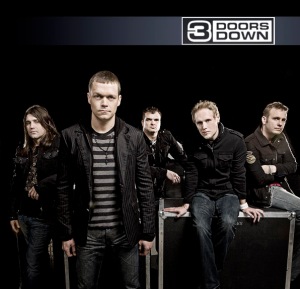 “Back in 2002 I was stationed in Rota Spain.  The rock group Three Doors Down was on the USO tour that year.  They just made a stop in Portugal where they filmed parts of music video on and were now set to play an outdoor concert in Rota.

I was one of the first people to get tickets to this show even though at the time I didn’t really know their music that well; it just seemed like a really good deal.  A few of my friends and I where even allowed to bring a couple of our friends from Norway to the show.  The day of the planned event there was some sort of threat made against the base and the concert was forced to move indoors.  The only place we could go was the base banquet hall.

Having originally been planned as an outdoor event there were far more people ticketed then the banquet hall held.  Luckily my girlfriend at the time worked for the MWR on base and informed us about the change in venue before most people new about it.  My friends and I ended up being a few of the less than 500 people who got to see Three Doors Down live!

Their set even included an unreleased song.  The concert was fantastic and, due to the size of the crowd, it had a very intimate feeling.  After the concert all of my buddies went out to the clubs in downtown and Rota and low and behold there was the band!  We were able to hang out with them for a little while before they went back to their hotel.  This is still one of my most cherished memories in my life and my career.  I would never have had any of this happen if not for the USO and the graciousness of Three Doors Down.  Thank you all for giving me one of the best times of my life!”  - Tommy G, US Navy

Amazing USO story, Tommy!  And although we know you didn’t have a digital camera on you back then (who did?), we know those memories will stay with you forever.  In honor of your experience, here’s a live version of “Here Without You” from Three Doors Down…